Who's going to whoop it up! 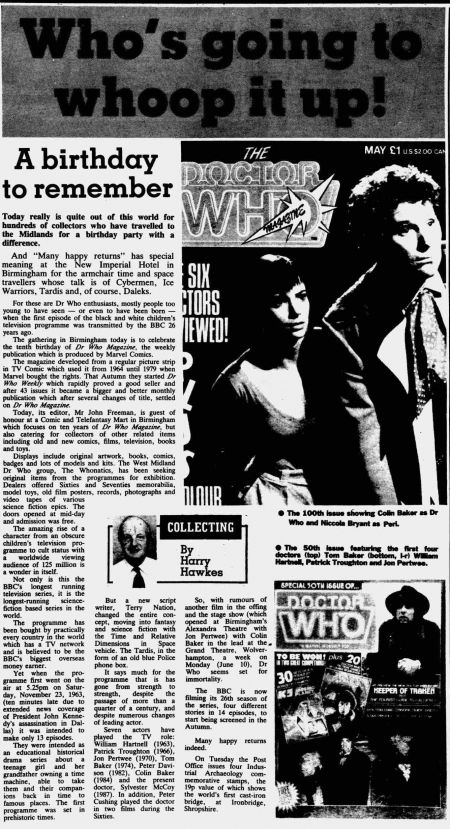 A birthday to remember

Today really is quite out of this world for hundreds of collectors who have travelled to the Midlands for a birthday party with a difference.

And "Many happy returns" has special meaning at the New Imperial Hotel in Birmingham for the armchair time and space travellers whose talk is of Cybermen, Ice Warriors, Tardis and, of course, Daleks.

For these are Dr Who enthusiasts, mostly people too young to have seen — or even to have been born — when the first episode of the black and white children's television programme was transmitted by the BBC 26 years ago.

The gathering in Birmingham today is to celebrate the tenth birthday of Dr Who Magazine, the weekly publication which is produced by Marvel Comics.

The magazine developed from a regular picture strip in TV Comic which used it from 1964 until 1979 when Marvel bought the rights. That Autumn they started Dr Who Weekly which rapidly proved a good seller and after 43 issues it became a bigger and better monthly publication which after several changes of title, settled on Dr Who Magazine.

Today, its editor, Mr John Freeman, is guest of honour at a Comic and Telefantasy Mart in Birmingham which focuses on ten years of Dr Who Magazine, but also catering for collectors of other related items including old and new comics, films, television, books and toys.

Displays include original artwork, books, comics, badges and lots of models and kits. The West Midland Dr Who group, The Whonatics, has been seeking original items from the programmes for exhibition. Dealers offered Sixties and Seventies memorabilia, model toys, old film posters, records, photographs and video tapes of various science fiction epics. The doors opened at mid-day and admission was free.

The amazing rise of a character from an obscure children's television programme to cult status with a worldwide viewing audience of 125 million is a wonder in itself.

Not only is this the BBC's longest running television series, it is the longest-running science-fiction based series in the world.

The programme has been bought by practically every country in the world which has a TV network and is believed to be the BBC's biggest overseas money earner.

Yet when the programme first went on the air at 5.25pm on Saturday, November 23, 1963, (ten minutes late due to extended news coverage of President John Kennedy's assassination in Dallas) it was intended to make only 13 episodes.

They were intended as an educational historical drama series about a teenage girl and her grandfather owning a time machine, able to take them and their companions back in time to famous places. The first programme was set in prehistoric times.

But a new script writer, Terry Nation, changed the entire concept, moving into fantasy and science fiction with the Time and Relative Dimensions in Space vehicle. The Tardis, in the form of an old blue Police phone box.

It says much for the programme that is has gone from strength to strength, despite the passage of more than a quarter of a century, and despite numerous changes of leading actor.

So, with rumours of another film in the offing and the stage show (which opened at Birmingham's Alexandra Theatre with Jon Pertwee) with Colin Baker in the lead at the. Grand Theatre, Wolverhampton, a week on Monday (June 10), Dr Who seems set for immortality.

The BBC is now filming its 26th season of the series, four different stories in 14 episodes, to start being screened in the Autumn.

Caption: The 100th Issue showing Colin Baker as Dr Who and Nicola Bryant as Pori.