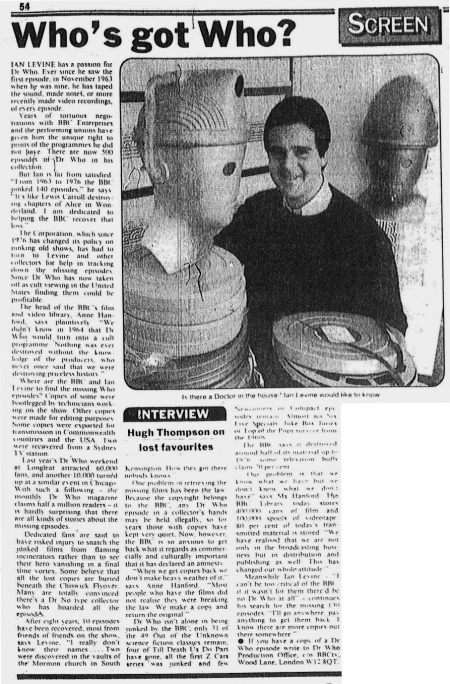 Ian Levine has a passion for Dr Who. Ever since he saw the first episode in November 1963 when he was nine, he has taped the sound, made notes, or more recently made video recordings of every episode.

Years of tortuous negotiations with BBC Enterprises and the performing unions have given, him the unique right to prints of the programmes he did not have. There are now 500 episodes of Dr Who in his collection.

But Ian is far from satisfied. "From 1963 to 1976 the BBC junked 140 episodes," he says. "It's like Lewis Carroll destroying chapters of Alice in Wonderland. I am dedicated to helping the BBC recover that loss."

The Corporation, which since 1976 has changed its policy on junking old shows, has had to turn to Levine and other collectors for help in tracking down the missing episodes. Since Dr Who has now taken off as cult viewing in the United States finding them could be profitable.

The head of the BBC's film and video library, Anne Hanturd, says plaintively: "We didn't know in 1964 that Dr Who would turn into a cult programme. Nothing was ever destroyed without the knowledge of the producers who never once said that we were destroying priceless history."

Where are the BBC and Ian Levine to find the missing Who episodes? Copies of some were bootlegged by technicians working on the show. Other copies were made for editing purposes. Some copies were exported for transmission in Commonwealth countries and the USA. Two were recovered from a Sydney TV station.

Last year's Dr Who weekend at Longleat attracted 60,000 fans and another 10,000 turned up at a similar event in Chicago. With such a following - the monthly Dr Who Magazine claims half a million readers - it is hardly surprising that there are all kinds of stories about the missing episodes.

Dedicated fans are said to have risked injury to snatch the junked films from flaming incinerators rather than to see their hero vanishing in a final time vortex. Some believe that all the lost copies are buried beneath the-Chiswick Flyover. Many are totally convinced there's a Dr No type collector who has hoarded all the episodes.

After eight years, 10 episodes have been recovered, most from friends of friends on the show, says Levine, "I really don't know their names .... Two were discovered in the vaults of the Mormon church in South Kensington. How they got there nobody knows."

One problem in retrieving the missing films has been the law. Because the copyright belongs to the BBC, any Dr Who episode in a collector's hands may be held illegally, so for years those with copies have kept very quiet. Now, however, the BBC is so anxious to get back what it regards as commercially and culturally important that it has declared an amnesty.

"When we get copies back we don't make heavy weather of it," says Anne Hanford. "Most people who have the films did not realise they were breaking the law. We make a copy and return the original."

Dr Who isn't alone in being junked by-the BBC; only 31 of the 49 Out of the Unknown science fiction classics remain, four of Till Death Us Do Part have gone; all the first Z Cars series was junked and few Newcomers or Compact episodes remain. Almost no Six Five Specials, Juke Box Juries or Top of the Pops survive from the 1960s.

The BBC says it destroyed around half of its material up to 1976; some television buffs claim 70 per cent.

"Our problem is that we know what we have but we don't know what we don't have" says Ms Hanford., The BBC Library today stores 400,000 cans of film and 100,000 spools of videotape. 80 per cent of today's transmitted material is stored. "We have realised that we are not only in the broadcasting business but in distribution and publishing as well. This has changed our whole attitude.

Meanwhile Ian Levine -- "I can't be too critical of the BBC; if it wasn't for them there'd be no Dr Who at all"- continues his search for the missing 130 episodes. "I'll go anywhere, pay anything to get them back. I know there are more copies out there somewhere."

If you have a copy of a Dr Who episode write to Dr Who Production Office, c/o BBCtv, Wood Lane, London W12 8QT.

Caption: Is there-a Doctor in the house? Ian Levine would like to know