Who's ready to break out 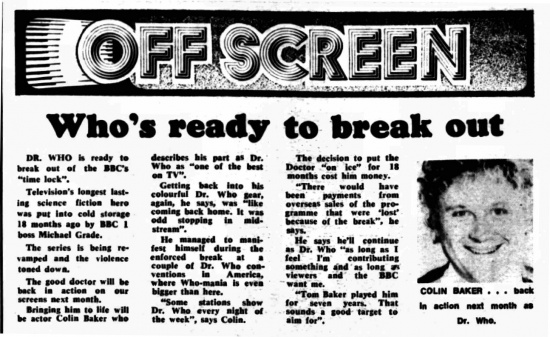 DR. WHO is ready to break out of the BBC's "time lock".

The series Is being revamped and the violence toned down.

The good doctor will be bock in action on our screens next month.

Bringing him to life will be actor Colin Baker who describes his part as Dr. Who as "one of the best on TV".

Getting back late his colourful Dr. Who gear, again, he says, was "like coming back home. It was odd stopping in midstream".

He managed to manifest himself during the enforced break at a couple of Dr. Who conventions in America where Who-mania is even bigger than here.

"Some stations show Dr. Who every night of the week", says Colin.

The decision to put the Doctor "on ice" for 18 months cost him money. "There would hate been payments from overseas sales of the programme that were 'lost' because of the break", he says.

He says he'll continue as Dr. Who "as long as I feel I'm contributing something and as long as viewers and the BBC want me.

"Tom Baker played him for seven years. That sounds a good target to aim for".

Caption: COLIN BAKER ... back in action next month as Dr. Who.