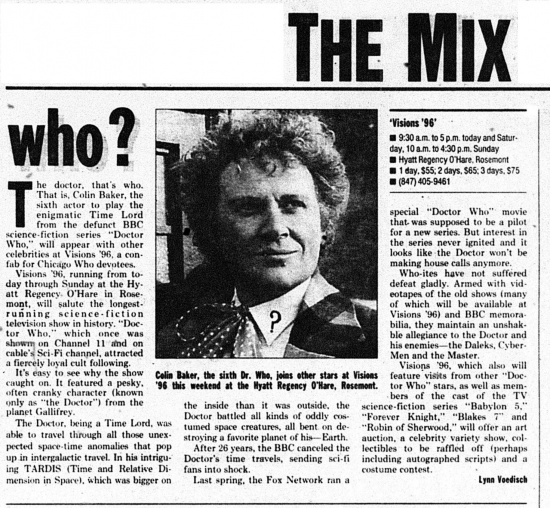 The doctor, that's who. That is, Colin Baker, the sixth actor to play the enigmatic Time Lord from the defunct BBC science-fiction series "Doctor Who," will appear with other celebrities at Visions '96, a confab for Chicago Who devotees.

Visions '96, running from today through Sunday at the Hyatt Regency O'Hare in Rosemont, will salute the longest-running science-fiction television show in history. "Doctor Who," which once was shown on Channel 11 and on cable's Sci-Fi channel, attracted a fiercely loyal cult following.

It's easy to see why the show caught on. It featured a pesky, often cranky character (known only as "the Doctor") from the planet Gallifrey.

The Doctor, being a Time Lord, was able to travel through all those unexpected space-time anomalies that pop up in intergalactic travel. In his intriguing TARDIS (Time and Relative Dimension in Space), which was bigger on the inside than it was outside, the Doctor battled all kinds of oddly costumed space creatures, all bent on destroying a favorite planet of his - Earth.

Last spring, the Fox Network ran a special "Doctor Who" movie that was supposed to be a pilot for a new series. But interest in the series never ignited and it looks like the Doctor won't be making house calls anymore.

Who-ites have not suffered defeat gladly. Armed with videotapes of the old shows (many of which will be available at Visions '96) and BBC memorabilia, they maintain an unshakble allegiance to the Doctor and his enemies - the Daleks, Cyber-Men and the Master.

Visions '96, which also will feature visits from other "Doctor Who" stars, as well as members of the cast of the TV science-fiction series "Babylon 5," "Forever Knight," "Blakes 7" and "Robin of Sherwood," will offer an art auction, a celebrity variety show, collectibles to be raffled off (perhaps including autographed scripts) and a costume contest.

Caption: Colin Baker, the sixth Dr. Who, joins other stars at Visions '96 this weekend at the Hyatt Regency O'Hare, Rosemont.