Who Is Out of This World

From The Doctor Who Cuttings Archive
Revision as of 23:31, 5 May 2019 by John Lavalie (talk | contribs)
(diff) ← Older revision | Latest revision (diff) | Newer revision → (diff)
Jump to navigationJump to search 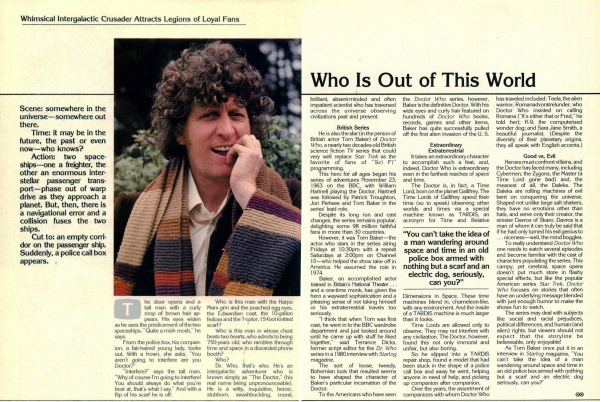 Scene: somewhere in the universe— somewhere out there.

Time: it may be in the future, the past or even now—who knows?

Action: two space-ships—one a freighter, the other an enormous interstellar passenger trans-port—phase out of warp drive as they approach a planet. But, then, there is a navigational error and a collision fuses the two ships.

Cut to: an empty corridor on the passenger ship. Suddenly, a police call box appears.

The door opens and a tall man with a curly mop of brown hair appears. His eyes widen as he sees the predicament of the two spaceships. "Quite a mish mosh," he says.

From the police box, his companion, a fair-haired young lady, looks out. With a frown, she asks, "You aren't going to interfere are you Doctor?"

"Interfere?" says the tall man. "Why of course I'm going to interfere! You should always do what you're best at, that's what I say." And with a flip of his scarf he is off.

Who is this man with the Harpo Marx grin and the poached egg eyes, the Edwardian coat, the 10-gallon fedora and the 7-color, 15-foot knitted scarf?

Who is this man in whose chest beats two hearts, who admits to being 750-years old, who rambles through time and space in a discarded phone booth?

Dr. Who, that's who. He's an intergalactic adventurer who is known simply as "The Doctor," (his real name being unpronounceable). He is a witty, inquisitive, heroic, stubborn, swashbuckling, moral, brilliant, absent-minded and often impatient scientist who has traversed across the universe observing civilizations past and present.

He is also the star (in the person of British actor Tom Baker) of Doctor Who, a nearly two decades-old British science fiction N series that could very well replace Star Trek as the favorite of fans of "Sci Fi" programming.

This hero for all ages began his series of adventures November 23, 1963 on the BBC, with William Hartnell playing the Doctor. Hartnell was followed by Patrick Troughton, Jon Pertwee and Tom Baker in the series' lead role.

Despite its long run and cast changes, the series remains popular, delighting some 98 million faithful fans in more than 30 countries.

However, it was Tom Baker—the actor. who stars in the series airing Fridays at 10:30pm with a repeat Saturdays at 2:00pm on Channel 10—who helped the show take off in America. He assumed the role in 1974.

Baker, an accomplished actor trained in Britain's National Theater ... and a one-time monk, has given the hero a wayward sophistication and a pleasing sense of not taking himself or his extraterrestrial travels too seriously.

"I think that when Tom was first cast, he went in to the BBC wardrobe department and just looked around -until he came up with stuff he liked together," said Terrance Dicks, former script editor for the Dr. Who series in a 1980 interview with Starlog magazine.

The sort of loose, tweedy, Bohemian look that resulted seems to have shaped the character of Baker's particular incarnation of the Doctor.

To the Americans who have seen the Doctor Who series, however, Baker is the definitive Doctor. With his wide eyes and curly hair featured on hundreds of Doctor Who books, records, games and other items, Baker has quite successfully pulled off the first alien invasion of the U. S.

It takes an extraordinary character to accomplish such a feat, and, indeed, Doctor Who is extraordinary even in the farthest reaches of space and time.

The Doctor is, in fact, a Time Lord, born on the planet Gallifrey. The Time Lords of Gallifrey spend their time (so to speak) observing other worlds and times via a special machine known as TARDIS, an acronym for Time and Relative Dimensions in Space. These time machines blend in, chameleon-like, with any environment. And the inside of a TARDIS machine is much larger than it looks.

Time Lords are allowed only to observe. They may not interfere with any civilization. The Doctor, however, found this not only immoral and unfair, but also boring.

So he slipped into a TARDIS repair shop, found a model that had been stuck in the shape of a police call box and away he went, helping anyone in need of help, and picking up companion after companion.

Over the years, the assortment of companions with whom Doctor Who has traveled included: Teela, the alien warrior; Romanadvoratrelunder, who Doctor Who insisted on calling Romana ("It's either that or Fred," he told her); K-9, the computerized wonder dog; and Sara Jane Smith, a beautiful journalist. (Despite the diversity of their planetary origins, they all speak with English accents.)

Heroes must confront villains, and the Doctor has faced many, including Cybermen, the Zygons, the Master (a Time Lord gone bad) and, the meanest of all, the Daleks. The Daleks are rolling machines of evil bent on conquering the universe. Shaped not unlike large salt shakers, they have no emotions other than hate, and serve only their creator, the sinister Davros of Skaro. Davros is a man of whom it can truly be said that if he had only turned his evil genius to ... niceness—well, the mind boggles.

To really understand Doctor Who one needs to watch several episodes and become familiar with the cast of characters populating the series. This campy, yet cerebral, space opera doesn't put much store in flashy special effects, but like the popular American series Star Trek, Doctor Who focuses on stories that often have an underlying message blended with just enough humor to make the shows fun to watch.

The series may deal with subjects like social and racial prejudices, political differences, and human (and alien) rights, but viewers should not expect that the storyline be believeable, only enjoyable!

As Tom Baker once put it in an interview in Starlog magazine, "You can't take the idea of a man wandering around space and time in an old police box armed with nothing but a scarf and an electric dog seriously, can you?"