Who Is The Hero Of Fantasy Series 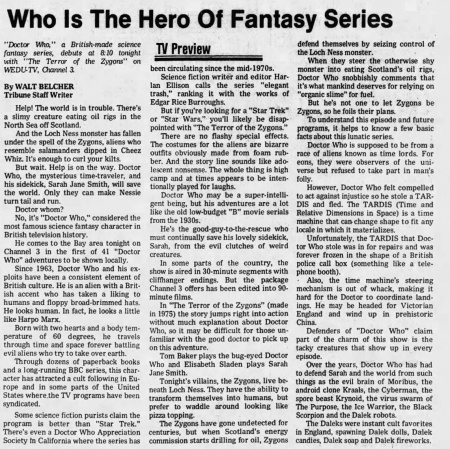 "Doctor Who," a British-made science fantasy series, debuts at 8:10 tonight with "The Terror of the Zygons" on WEDU-TV, Channel 3

Help! The world is in trouble. There's a slimy creature eating oil rigs in the North Sea off Scotland.

And the Loch Ness monster has fallen under the spell of the Zygons, aliens who resemble salamanders dipped in Cheez Whiz. It's enough to curl your kilts.

But wait. Help is on the way. Doctor Who, the mysterious time-traveler, and his sidekick, Sarah Jane Smith, will save the world. Only they can make Nessie turn tail and run.

No, it's "Doctor Who," considered the most famous science fantasy character in British television history.

He comes to the Bay area tonight on Channel 3 in the first of 41 "Doctor Who adventures to be shown locally.

Since 1963, Doctor Who and his exploits have been a consistent element of British culture. He is an alien with a British accent who has taken a liking to humans and floppy broad-brimmed hats. He looks human. In fact, he looks a little like Harpo Marx.

Born with two hearts and a body temperature of 60 degrees, he travels through time and space forever battling evil aliens who try to take over earth.

Through dozens of paperback books and a long-running BBC series, this character has attracted a cult following in Europe and in some parts of the United States where .the TV programs have been syndicated.

Some science fiction purists claim the program is better than "Star Trek." There's even a Doctor Who Appreciation Society in California where the series has been circulating since the mid-1970s.

But if you're looking for a "Star Trek" or "Star Wars," you'll likely be disappointed with "The Terror of the Zygons."

There are no flashy special effects. The costumes for the aliens are bizarre outfits obviously made from foam rubber. And the story line sounds like adolescent nonsense. The whole thing is high camp and at times appears to be intentionally played for laughs.

Doctor Who may be a super-intelligent being, but his adventures are a lot like the old low-budget "B" movie serials from the 1930s.

He's the good-guy-to-the-rescue who must continually save his lovely sidekick, Sarah, from the evil clutches of weird creatures.

In some parts of the country, the show is aired in 30-minute segments with cliffhanger endings. But the package Channel 3 offers has been edited into 90-minute films.

In The Terror of the Zygons" (made in 1975) the story jumps right into action without much explanation about Doctor Who, so it may be difficult for those unfamiliar with the good doctor to pick up on this adventure.

Tonight's villains, the Zygons, live beneath Loch Ness. They have the ability to transform themselves into humans, but prefer to waddle around looking like pizza topping.

The Zygons have gone undetected for centuries, but when Scotland's energy commission starts drilling for oil, Zygons defend themselves by seizing control of the Loch Ness monster.

When they steer the otherwise shy monster into eating Scotland's oil rigs, Doctor Who snobbishly comments that it's what mankind deserves for relying on "organic slime" for fuel.

But he's not one to let Zygons be Zygons, so he foils their plans.

To understand this episode and future programs, it helps to know a few basic facts about this lunatic series.

Doctor Who is supposed to be from a race of aliens known as time lords. For eons, they were observers of the universe but refused to take part in man's folly.

However, Doctor Who felt compelled to act against injustice so he stole a TARDIS and fled. The TARDIS (Time and Relative Dimensions in Space) is a time machine that can change shape to fit any locale in which it materializes.

Unfortunately, the TARDIS that Doctor Who stole was in for repairs and was forever frozen in the shape of a British police call box (something like a telephone booth).

Also, the time machine's steering mechanism is out of whack, making it hard for the Doctor to coordinate landings. He may be headed for Victorian England and wind up in prehistoric China.

Defenders of "Doctor Who" claim part of the charm of this show is the tacky creatures that show up in every episode.

Over the years, Doctor Who has had to defend Sarah and the world from such things as the evil brain of Moribus, the android clone Kraals, the Cyberman, the spore beast Krynoid, the virus swarm of The Purpose, the Ice Warrior, the Black Scorpion and the Dalek robots.