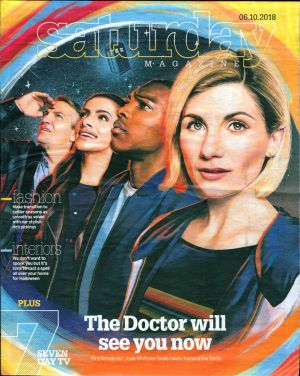 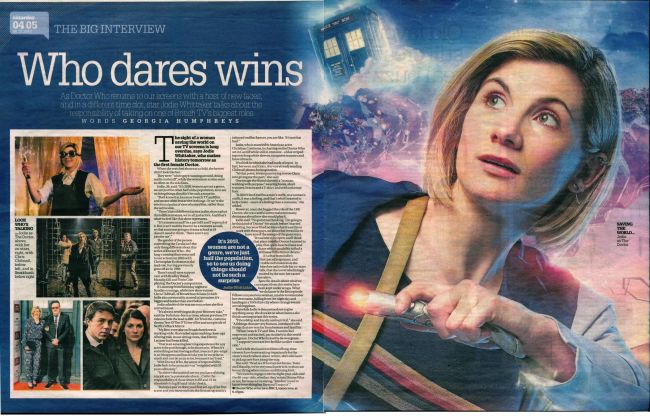 As Doctor Who returns to our screens with a host of new faces, and in a different time slot, star Jodie Whittaker talks about the responsibility of taking on one of British TV's biggest roles

The sight of a woman saving the world on our TV screens is long overdue, says Jodie Whittaker, who makes history tomorrow as the first female Doctor.

Wien she watched shows as a child, the heroes didn't look like her.

They were "white guys running around, doing really cool stuff", while the women on screen were so often on the sidelines.

Jodie, 36, said: "It's 2018, women are not a genre, we are just the other half of the population, so to see us doing things shouldn't be such a surprise.

"But 1 know it is, because 1 watch TV and film and we are often less active in things. Or we're the emotional point of view of a storyline, rather than the active one.

"There's lots of different actors in this show rather than different sexes, we're all just actors. And that's what we feel like this show represents.

"It's a moment and I'm a part of it and I'm proud of it. But I can't wait for it not to be a moment as well, so that someone going to drama school at 18 doesn't need to think, 'There aren't any jobs for me'."

The gender of the person controlling the Tardis isn't the only thing different about this series of Doctor Who - the long-running show returned to our screens in 2005 with Christopher Eccleston in the lead role, having previously gone off air in 1989.

It's moving from Saturday nights to Sunday evenings, while new show runner Chris Chibnall, of Broadchurch fame (which Jodie also memorably starred in) promises it's bigger and bolder than ever before.

Jodie admitted she was nervous when she first arrived on set.

"It's always terrifying to do your first ever take," said the Yorkshire-born actress, whose previous TV roles include the lead in BBC hit Trust Me, costume drama Tess Of The D'Urbervilles and an episode of Netflix's Black Mirror.

"My first-ever take on Broadchurch was a tracking wide, that ended up In tracking close-ups of being told, in our sitting room, that Danny Latimer had been killed.

"That is an amazing learning experience for any actor to be put through, to be thrown in. When it's something as harrowing as that, you can't pre-empt it, so it happens and has to take you by surprise as much as it can do as an actor, because it isn't real."

With Doctor Who, the sense of responsibility Jodie feels to be accurate was "weighted with 55 years of history".

"So there's the natural nerves you have of doing any job you're passionate about... Cut to the responsibility of those shoes to fill and I'd be absolutely lying if I said I didn't feel it.

Jodie, who is married to American actor Christian Contreras, is chatting on the Doctor Who set in Cardiff while still in costume - a blue striped top over long white sleeves, turquoise trousers and brown braces.

It's a look in which she had loads of input in fact, between auditions, she was already sending Chibnall photos for inspiration.

"At that point, it was more trying to woo Chris into giving me the part," she said.

One image she found showed a "woman, walking with purpose" wearing boots, short trousers, braces and a T-shirt, and with unkempt hair.

It didn't lend itself to a man's outfit, or a woman's outfit, It was a feeling, and that's what 1 wanted to help create more of a feeling than a costume," she added.

However, once she bagged the role of the 13th Doctor, she was careful not to make too many decisions about how she would play it.

Jodie said: "No point me thinking, 'I'm going to be this kind of Doctor' too much before I started shooting, because I had no idea what it was like to work with these guys, no idea what it was like to have any of the energy of the guest stars. "It was best to be open, and I think that plays into the Doctor I wanted to play, that open-heartedness and chaos within an ability to find a stillness in the tiniest details." It's clear from Jodie's

fast-paced responses, and visible nervousness as she

bites her nails while her co-stars talk, that she's overwhelmingly excited by the turn her career has taken.

Specific details about what we can expect from this series have been kept under wraps. What we do know is the first episode follows a mysterious woman, unable to remember her own name, falling from the night sky and landing in a Yorkshire city where strange events are taking place.

But while Jodie is determined not to give anything away, she does let on what themes she thinks are important this series.

"When I watch TV and film, I want to feel engrossed and excited, particularly in this world and genre. Doctor Who in itself is its own genre.

"I suppose you want it to feel like a roller-coaster ride."

And while she knows millions of long-time viewers have been waiting impatiently for the show's much talked-about return, she's also keen to pick up new fans along the way.

She said: "Brad is a Whovian but for me, Tosin and Mandip, we're very much new to it, so that can be terrifying when you are auditioning for it.

"We want to engage with the eight-year-olds and the 80-year-olds, whether they're into Doctor Who or not, because were saying, 'You don't need to know everything but I bet you'll enjoy it'."

Caption: LOOK WHO'S TALKING ... Jodie as The Doctor, above, with her co-stars, right, with Chris Chibnall, below left, and in Broadchurch, below right

Caption: SAVING THE WORLD... Jodie as The Doctor