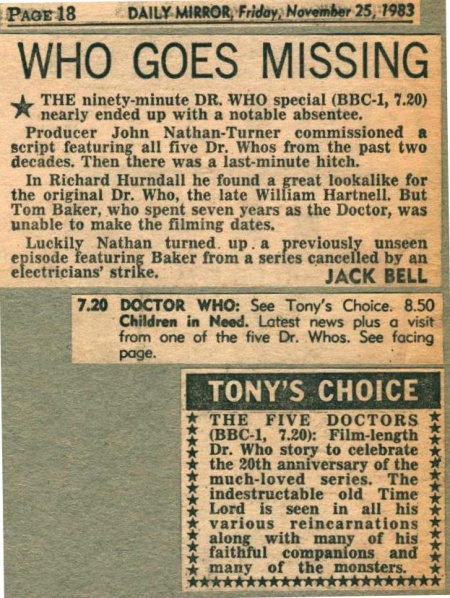 THE ninety-minute DR. WHO special (BBC-1, 7.20) nearly ended up with a notable absentee. Producer John Nathan-Turner commissioned a script featuring all five Dr. Whos from the past two decades. Then there was a last-minute hitch.

In Richard Hurndall he found a great lookalike for the original Dr. Who, the late William Hartnell. But Tom Baker, who spent seven years as the Doctor, was unable to make the filming dates.

Luckily Nathan turned up a previously unseen episode featuring Baker from a series cancelled by an electricians' strike.

7.20 DOCTOR WHO: See Tony's Choice. 8.50 Children in Need. Latest news plus a visit from one of the five Dr. Whos. See facing page.

THE FIVE DOCTORS (BBC-1, 7.20): Film-length Dr. Who story to celebrate the 20th anniversary of the TV much-loved series. The indestructable old Time Lord is seen in all his various reincarnations along with many of his faithful companions and many of the monsters.