Who is Mr. Spock? 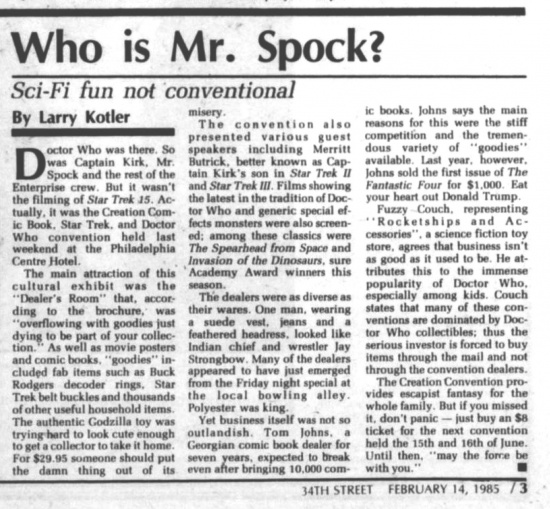 Doctor Who was there So was Captain Kirk. Mr. Spock and the rest of the Enterprise crew. But it wasn't the filming of Star Trek J.S. Actually. it was the Creation Comic Hook. Star Trek. and Doctor Who convention held last weekend at the Philadelphia Centre Hotel.

The main attraction of this cultural exhibit was the "Dealer's Room" that according to the brochure, was "overflowing with goodies lust dying to be part of your collection." As well as movie posters and comic books, goodies" included fab items such as Buck Rodgers decoder rings. Star Trek belt buckles and thousands of other useful household items. The authentic Godzilla toy was trying hard to look cute enough to get a collector to take it home For $29.95 someone should put the damn thing out of its misery.

The convention also presented various guest speakers including Merritt Butrick, better known as Captain Kirk's son in Star Trek II and Star Trek III. Films showing the latest in the tradition of Doctor Who and generic special effects monsters were also screened; among these classics were The Spearhead from Space and Invasion of the Dinosaurs, sure Academy Award winners this season.

The dealers were as diverse as their wares. One man, wearing a suede vest, Mans and a feathered headress, looked like Indian chief and wrestler Jay Strongbow Many of the dealers appeared to have lust emerged from the Friday night special at the local bowling alley. Polyester was king.

Yet business itself was not so outlandish Tom Johns, Georgian comic hook dealer for seven years. expected to break even after bringing 10,000 comic books. Johns says the main masons for this were the stiff competition and the tremendous variety of "goodies" available last year. however. Johns sold the first issue of The Fantastic Four for $1.000 Eat your heart out Donald Trump.

Fuzzy Couch, representing "Rocketships and Accessories", a science fiction toy store, agrees that business isn't as good as it used to be He attributes this to the immense popularity of Doctor Who. especially among kids. Couch states that many of these conventions are dominated by Doctor Who collectibles; thus the serious investor is forced to buy items through the mail and not through the convention dealers.

The Creation Convention provides escapist fantasy for the whole family But if you missed it, don't panic — just buy an $8 ticket for the next convention held the 15th and 18th of June. Until then, "may the force be with you.