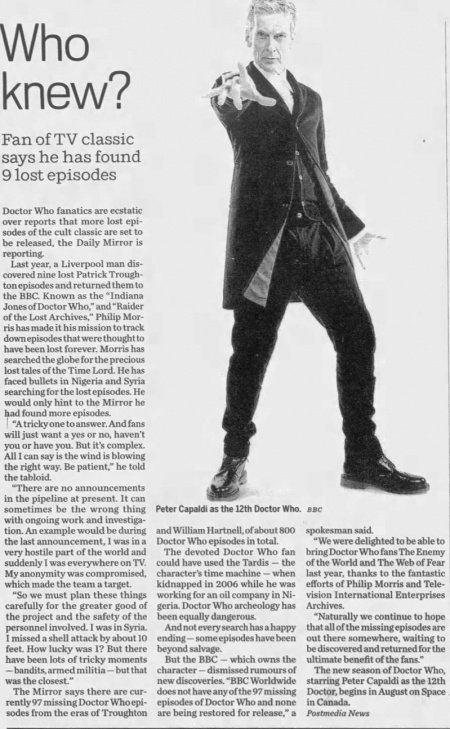 Fan of TV classic says he has found 9 lost episodes

Doctor Who fanatics are ecstatic over reports that more lost episodes of the cult classic are set to be released, the Daily Mirror is reporting.

Last year, a Liverpool man discovered nine lost Patrick Troughton episodes and returned them to the BBC. Known as the "Indiana Jones of Doctor Who," and "Raider of the Lost Archives," Philip Morris has made it his mission to track down episodes that were thought to have been lost forever. Morris has searched the globe for the precious lost tales of the Time Lord. He has faced bullets in Nigeria and Syria searching for the lost episodes. He would only hint to the Mirror he had found more episodes.

"A tricky one to answer. And fans will just want a yes or no, haven't you or have you. But it's complex. All I can say is the wind is blowing the right way. Be patient," he told the tabloid.

"There are no announcements in the pipeline at present. It can sometimes be the wrong thing with ongoing work and investigation. An example would be during the last announcement, 1 was in a very hostile part of the world and suddenly I was everywhere on TV. My anonymity was compromised, which made the team a target.

"So we must plan these things carefully for the greater good of the project and the safety of the personnel involved. I was in Syria. I missed a shell attack by about 10 feet. How lucky was I? But there have been lots of tricky moments — bandits, armed militia — but that was the closest."

The devoted Doctor Who fan could have used the Tardis — the character's time machine — when kidnapped in 2006 while he was working for an oil company in Nigeria. Doctor Who archeology has been equally dangerous.

And not every search has a happy ending — some episodes have been beyond salvage.

But the BBC — which owns the character — dismissed rumours of new discoveries. "BBC Worldwide does not have any of the 97 missing episodes of Doctor Who and none are being restored for release," a BBC spokesman said.

"We were delighted to be able to bring Doctor Who fans The Enemy of the World and The Web of Fear last year, thanks to the fantastic efforts of Philip Morris and Television International Enterprises Archives.

"Naturally we continue to hope that all of the missing episodes are out there somewhere, waiting to be discovered and returned for the ultimate benefit of the fans."

The new season of Doctor Who, starring Peter Capaldi as the 12th Doctor, begins in August on Space in Canada.