Who talks at Hilton to launch syndicate 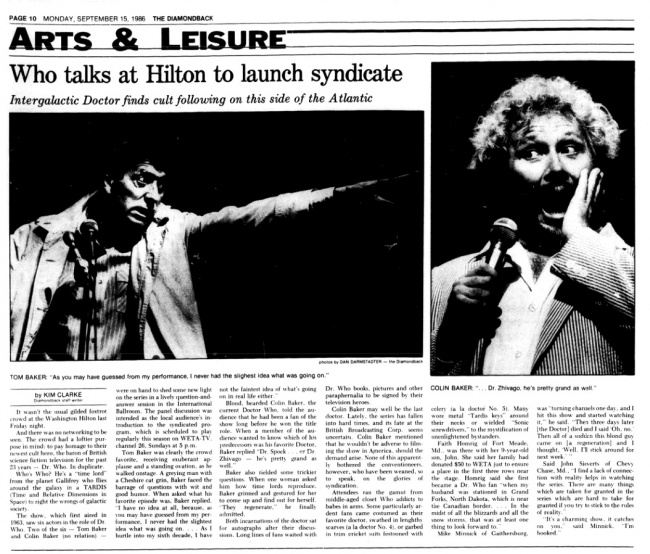 It wasn't the usual gilded foxtrot crowd at the Washington Hilton last Friday night. And there was no networking to be seen. The crowd had a loftier pur pose in mind: to pay homage to their newest cult hero, the baron of British science fiction television for the past 23 years Dr. Who. In duplicate.

Who's Who? He's a "time lord" from the planet Gallifrey who flies around the galaxy in a TARDIS (Time and Relative Dimensions in Space) to right the wrongs of galactic society.

The show, which first aired in 1963, saw six actors in the role of Dr. Who. Two of the six -- Tom Baker and Colin Baker (no relation) -- were on hand to shed some new light on the series in a lively question-and answer session in the International Ballroom. The panel discussion was intended as the local audience's in-troduction to the syndicated program. which is scheduled to play regularly this season on WETA-TV, channel 26, Sundays at 5 p.m.

Tom Baker was clearly the crowd favorite, receiving exuberant applause and a standing ovation, as he walked onstage. A greying man with a Cheshire cat grin. Baker faced the barrage of questions with wit and good humor. When asked what his favorite episode was. Baker replied, "I have no idea at all, because, as you may have guessed from my performance, I never had the slightest idea what was going on. ... As I hurtle into my sixth decade, 1 have not the faintest idea of what's going on in real life either." Blond, bearded Colin Baker, the current Doctor Who, told the audience that he had been a fan of the show long before he won the title role. When a member of the audience wanted to know which of his predecessors was his favorite Doctor, Baker replied "Dr. Spock ... or Dr. Zhivago he's pretty grand as well."

Baker also fielded some trickier questions. When one woman asked him how time lords reproduce. Baker grinned and gestured for her to come up and find out for herself. "They regenerate," he finally admitted.

Both incarnations of the doctor sat for autographs after their discussions. Long lines of fans waited with Dr. Who books, pictures and other paraphernalia to be signed by their television heroes.

Colin Baker may well be the last doctor. Lately, the series has fallen into hard times, and its fate at the British Broadcasting Corp. seems uncertain. Colin Baker mentioned that he wouldn't be adverse to filming the show in America, should the demand arise. None of this apparently bothered the conventioneers, however, who have been weaned, so to speak, on the glories of syndication.

Attendees ran the gamut from middle-aged closet Who addicts to babes in arms. Some particularly ardent fans came costumed as their favorite doctor, swathed in lenghthy scarves (a la doctor No. 4), or garbed in trim cricket suits festooned with celery (a la doctor No. 5). Many wore metal "Tardis keys" around their necks or wielded "Sonic screwdrivers," to the mystification of unenlightened bystanders.

Faith Homrig of Fort Meade, Md.. was there with her 9-year-old son, John. She said her family had donated $50 to WETA just to ensure a place in the first three rows near the stage. Homrig said she first became a Dr. Who fan "when my husband was stationed in Grand Forks, North Dakota, which is near the Canadian border. ... In the midst of all the blizzards and all the snow storms, that was at least one thing to look forward to. "

Mike Minnick of Gaithersburg, was "turning channels one day, and I hit this show and started watching it," he said. "Then three days later [the Doctor] died and I said 'Oh, no.' Then all of a sudden this blond guy came on [a regeneration] and I thought, 'Well, I'll stick around for next week.'"

Said John Sieverts of Chevy Chase, Md., "I find a lack of connection with reality helps in watching the series. There are many things which are taken for granted in the series which are hard to take for granted if you try to stick to the rules of reality."

"It's a charming show, it catches on you," said Minnick. "I'm hooked."