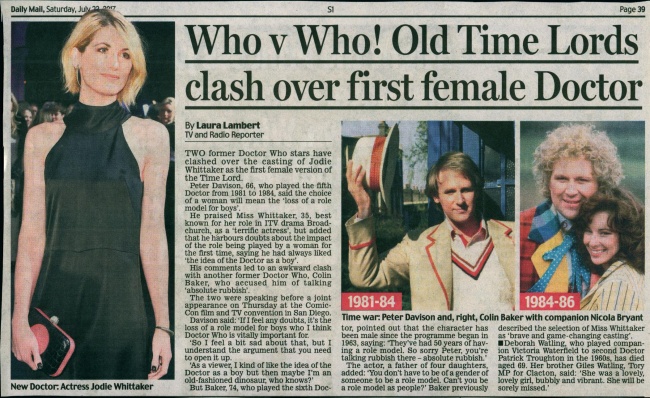 TWO former Doctor Who stars have clashed over the casting of Jodie Whittaker as the first female version of the Time Lord.

He praised Miss Whittaker, 35, best known for her role in ITV drama Broadchurch, as a 'terrific actress', but added that he harbours doubts about the impact of the role being played by a woman for the first time, saying he had always liked the idea of the Doctor as a boy'.

His comments led to an awkward clash with another former Doctor Who, Colin Baker, who accused him of talking 'absolute rubbish'.

The two were speaking before a joint appearance on Thursday at the Comic-Con film and TV convention in San Diego. Davison said:111 feel any doubts, it's the loss of a role model for boys who I think Doctor Who is vitally important for.

'So I feel a bit sad about that, but I understand the argument that you need to open it up.

'As a viewer, I kind of like the idea of the Doctor as a boy but then maybe I'm an old-fashioned dinosaur, who knows?'

But Baker, 74, who played the sixth Doctor, pointed out that the character has been male since the programme began in 1963, saying: 'They've had 50 years of having a role model. So sorry Peter, you're talking rubbish there - absolute rubbish.' The actor, a father of four daughters, added: 'You don't have to be of a gender of someone to be a role model. Can't you be a role model as people?' Baker previously described the selection of Miss Whittaker as 'brave and game-changing casting'.

Deborah Watling, who played companion Victoria Waterfield to second Doctor Patrick Troughton in the 1960s, has died aged 69. Her brother Giles Watling, Tory MP for Clacton, said: 'She was a lovely, lovely girl, bubbly and vibrant. She will be sorely missed.'