Whovians unite in 'Doctor Who' RSO, the Shadow Proclamation 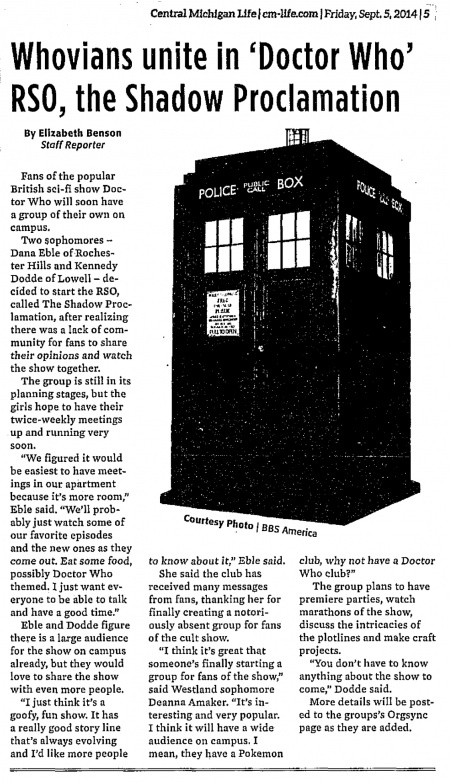 Fans of the popular British sci-fi show Doctor Who will soon have a group of their own on campus.

Two sophomores — Dana Eble of Rochester Hills and Kennedy Dodde of Lowell — decided to start the RSO*, called The Shadow Proclamation, after realizing there was a lack of community for fans to share their opinions and watch the show together.

The group is still in its planning stages, but the girls hope to have their twice-weekly meetings up and running very soon.

"We figured it would be easiest to have meetings in our apartment because it's more room," Eble said. "We'll probably just watch some of our favorite episodes and the new ones as they come out. Eat some food, possibly Doctor Who themed. I just want everyone to be able to talk and have a good time."

Eble and Dodde figure there is a large audience for the show on campus already, but they would love to share the show with even more people.

"I just think it's a goofy, fun show. It has a really good story line that's always evolving and I'd like more people to know about it," Eble said.

She said the club has received many messages from fans, thanking her for finally creating a notoriously absent group for fans of the cult show.

"I think it's great that someone's finally starting a group for fans of the show," said Westland sophomore Deanna Amaker. "It's interesting and very popular. I think it will have a wide audience on campus. I mean, they have a Pokemon club, why not have a Doctor Who club?"

The group plans to have premiere parties, watch marathons of the show, discuss the intricacies of the plotlines and make craft projects.

"You don't have to know anything about the show to come," Dodde said.

More details will be posted to the groups's Orgsync page as they are added.