Why I almost gave up acting 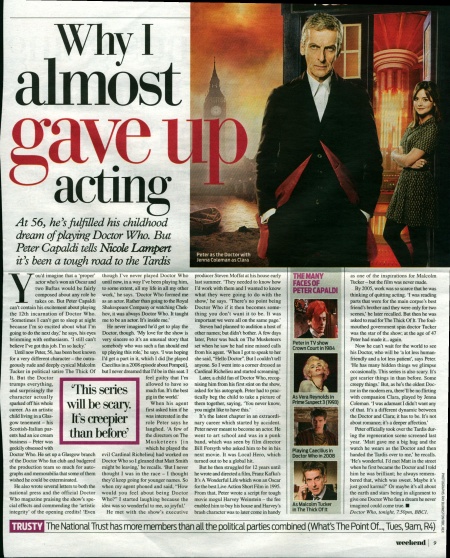 At 56, he's fulfilled his childhood dream of playing Doctor Who. But Peter Capaldi tells Nicole Lampert it's been a tough road to the Tardis Peter as the Doctor with Jenna Coleman as Clara

You'd imagine that a 'proper' actor who's won an Oscar and two Baftas would be fairly composed about any role he takes on. But Peter Capaldi can't contain his excitement about playing the 12th incarnation of Doctor Who. 'Sometimes I can't get to sleep at night because I'm so excited about what I'm going to do the next day,' he says, his eyes brimming with enthusiasm. 'I still can't believe I've got this job. I'm so lucky.'

Until now Peter, 56, has been best known for a very different character — the outrageously rude and deeply cynical Malcolm Tucker in political satire The Thick Of It. But the Doctor trumps everything, and surprisingly the character actually sparked off his whole career. As an artistic child living in a Glasgow tenement — his Scottish-Italian parents had an ice cream business — Peter was geekily obsessed with Doctor Who. He set up a Glasgow branch of the Doctor Who fan club and badgered the production team so much for autographs and memorabilia that some of them wished he could be exterminated.

He also wrote several letters to both the national press and the official Doctor Who magazine praising the show's special effects and commending the 'artistic integrity' of the opening credits! 'Even though I've never played Doctor Who until now, in a way I've been playing him, to some extent, all my life in all my other work,' he says. 'Doctor Who formed me as an actor. Rather than going to the Royal Shakespeare Company or watching Chekhov, it was always Doctor Who. It taught me to be an actor. It's inside me.'

He never imagined he'd get to play the Doctor, though. 'My love for the show is very sincere so it's an unusual story that somebody who was such a fan should end up playing this role,' he says. 'I was hoping I'd get a part in it, which I did [he played Caecilius in a 2008 episode about Pompeii], but I never dreamed that I'd be in this seat. I feel guilty that I'm allowed to have so much fun. It's the best gig in the world.'

When his agent first asked him if he was interested in the role Peter says he laughed. 'A few of the directors on The Musketeers [in which he played the evil Cardinal Richelieu] had worked on Doctor Who so I gleaned that Matt Smith might be leaving,' he recalls. 'But I never thought I was in the race — I thought they'd keep going for younger names. So when my agent phoned and said, "How would you feel about being Doctor Who?" I started laughing because the idea was so wonderful to me, so joyful.'

He met with the show's executive producer Steven Moffat at his house early last summer. 'They needed to know how I'd work with them and I wanted to know what they were going to do with the show,' he says. 'There's no point being Doctor Who if it then becomes something you don't want it to be. It was important we were all on the same page.'

Steven had planned to audition a host of other names; but didn't bother. A few days later, Peter was back on The Musketeers set when he saw he had nine missed calls from his agent. 'When I got to speak to her she said, "Hello Doctor". But I couldn't tell anyone. So I went into a corner dressed as Cardinal Richelieu and started screaming.'

Later, a child fan of Doctor Who, recognising him from his first stint on the show, asked for his autograph. Peter had to practically beg the child to take a picture of them together, saying, 'You never know, you might like to have this.'

It's the latest chapter in an extraordinary career which started by accident. Peter never meant to become an actor. He went to art school and was in a punk band, which was seen by film director Bill Forsyth who asked him to be in his next movie. It was Local Hero, which turned out to be a global hit.

But he then struggled for 12 years until he wrote and directed a film, Franz Kafka's It's A Wonderful Life which won an Oscar for the best Live Action Short Film in 1995. From that, Peter wrote a script for tough movie mogul Harvey Weinstein — the fee enabled him to buy his house and Harvey's brash character was to later come in handy as one of the inspirations for Malcolm 'nicker — but the film was never made.

By 2005, work was so scarce that he was thinking of quitting acting. 'I was reading parts that were for the main corpse's best friend's brother and they were only for two scenes,' he later recalled. But then he was asked to read for The Thick Of It. The foulmouthed government spin doctor 'Ricker was the star of the show; at the age of 47 Peter had made it... again.

Now he can't wait for the world to see his Doctor, who will be 'a lot less human-friendly and a lot less patient', says Peter. 'He has many hidden things we glimpse occasionally. This series is also scary. It's got scarier things in than before. Some creepy things.' But, as he's the oldest Doctor in the modern era, there'll be no flirting with companion Clara, played by Jenna Coleman. 'I was adamant I didn't want any of that. It's a different dynamic between the Doctor and Clara; it has to be. It's not about romance; it's a deeper affection.'

Peter officially took over the Tardis during the regeneration scene screened last year. 'Matt gave me a big hug and the watch he wears as the Doctor and then handed the Tardis over to me,' he recalls. 'He's wonderful. I'd met Matt in the street when he first became the Doctor and I told him he was brilliant; he always remembered that, which was sweet. Maybe it's just good karma?' Or maybe it's all about the earth and stars being in alignment to give one Doctor Who fan a dream he never imagined could come true.

THE MANY FACES OF PETER CAPALDI

Playing Caecilius in Doctor Who in 2008

As Malcolm Tucker in The Thick Of It