Why can't daleks go up stairs? 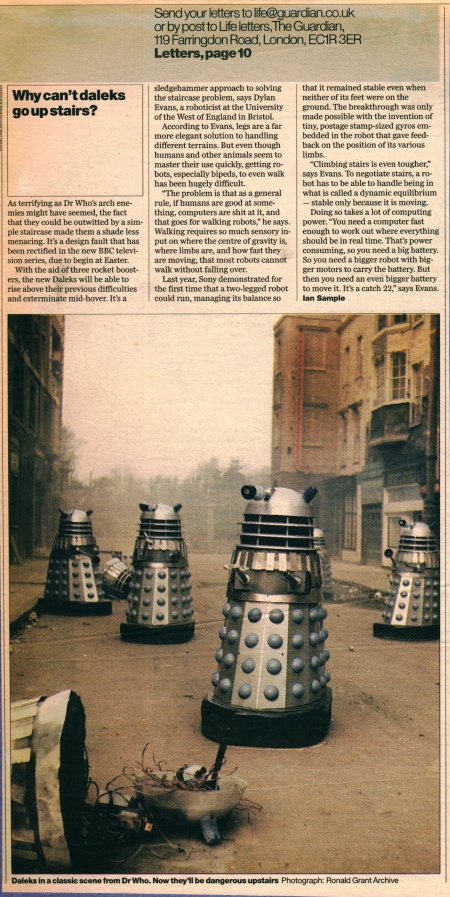 As terrifying as Dr Who's arch enemies might have seemed, the fact that they could be outwitted by a simple staircase made them a shade less menacing. It's a design fault that has been rectified in the new BBC television series, due to begin at Easter.

With the aid of three rocket boosters, the new Daleks will be able to rise above their previous difficulties and exterminate mid-hover. It's a sledgehammer approach to solving the staircase problem, says Dylan Evans, a roboticist at the University of the West of England in Bristol.

According to Evans, legs are a far more elegant solution to handling different terrains. But even though humans and other animals seem to master their use quickly, getting robots, especially bipeds, to even walk has been hugely difficult.

"The problem is that as a general rule, if humans are good at something, computers are shit at it, and that goes for walking robots," he says. Walking requires so much sensory input on where the centre of gravity is, where limbs are, and how fast they are moving, that most robots cannot walk without falling over.

Last year, Sony demonstrated for the first time that a two-legged robot could run, managing its balance so that it remained stable even when neither of its feet were on the ground. The breakthrough was only made possible with the invention of tiny, postage stamp-sized gyros embedded in the robot that gave feedback on the position of its various limbs.

"Climbing stairs is even tougher," says Evans. To negotiate stairs, a robot has to be able to handle being in what is called a dynamic equilibrium — stable only because it is moving.

Doing so takes a lot of computing power. "You need a computer fast enough to work out where everything should be in real time. That's power consuming, so you need a big battery. So you need a bigger robot with bigger motors to carry the battery. But then you need an even bigger battery to move it. It's a catch 22," says Evans.