Why we don't classify programmes--BBC 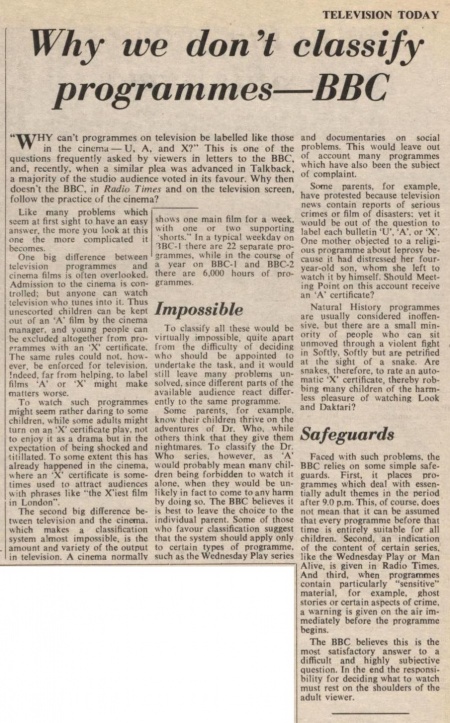 WHY can't programmes on television be labelled like those in the cinema — U, A, and X?" This is one of the questions frequently asked by viewers in letters to the BBC, and, recently, when a similar plea was advanced in Talkback, a majority of the studio audience voted in its favour. Why then doesn't the BBC, in Radio Times and on the television screen, follow the practice of the cinema?

Like many problems which seem at first sight to have an easy answer, the more you look at this one the more complicated it becomes.

One big difference between television programmes and cinema films is often overlooked. Admission to the cinema is controlled: but anyone can watch television who tunes into it. Thus unescorted children can be kept out of an 'A' film by the cinema manager. and young people can be excluded altogether from programmes w ith an 'X' certificate. The same rules could not. however, be enforced for television. Indeed, far from helping, to label films 'A' or 'X' might make matters worse.

To watch such programmes might seem rather daring to some children, while some adults might turn on an 'X' certificate play, not to enjoy it as a drama but in the expectation of being shocked and titillated. To some extent this has already happened in the cinema, where an 'X' certificate is sometimes used to attract audience with phrases like "the X'iest film in London'.

The second big difference between television and the cinema. which makes a classification system almost impossible, is the amount and variety of the output in television. A cinema normally shows one main film for a week. with one or two supporting 'shorts." In a typical weekday on BBC-1 there are 22 separate programmes, while in the course of a year on BBC-1 and BBC-2 there are 6,000 hours of programmes.

To classify all these would be virtually impossible. quite apart from the difficulty of deciding who should be appointed to undertake the task, and it would still leave many problems unsolved. since different parts of the available audience react differently to the same programme.

Some parents, for example, know their children thrive on the adventures of Dr. Who, while others think that they give them nightmares. To classify the Dr. Who series, however, as 'A' would probably mean many children being forbidden to watch it alone, when they would be unlikely in fact to come to any harm by doing so. The BBC believes it is best to leave the choice to the individual parent. Some of those who favour classification suggest that the system should apply only to certain types of programme. such as the Wednesday Play series and documentaries on social problems. This would leave out of account many programmes which have also been the subject of complaint.

Some parents. for example, have protested because television news contain reports of serious crimes or film of disasters: vet it would be out of the question to label each bulletin 'U', 'A'. or One mother objected to a religious programme about leprosy because it had distressed her four-year-old son, whom she left to watch it by himself. Should Meeting Point on this account receive an 'A' certificate?

Natural History programmes are usually considered inoffensive. but there are a small minority of people who can sit unmoved through a violent fight in Softly, Softly but are petrified at the sight of a snake. Are snakes, therefore, to rate an automatic 'X' certificate, thereby robbing many children of the harmless pleasure of watching Look and Daktari?

Faced with such problems, the BBC relies on some simple safeguards. First, it places programmes which deal with essentially adult themes in the period after 9.0 p.m. This, of course, does not mean that it can be assumed that every programme before that time is entirely suitable for all children. Second, an indication of the content of certain series. like the Wednesday Play or Man Alive, is given in Radio Times. And third, when programmes contain particularly "sensitive" material, for example, ghost stories or certain aspects of crime. a warning is given on the air immediately before the programme begins.

The BBC believes this is the most satisfactory answer to a difficult and highly subjective question. In the end the responsibility for deciding what to watch must rest on the shoulders of the adult viewer.