Win a who's who guide to the mysterious Doctor Who 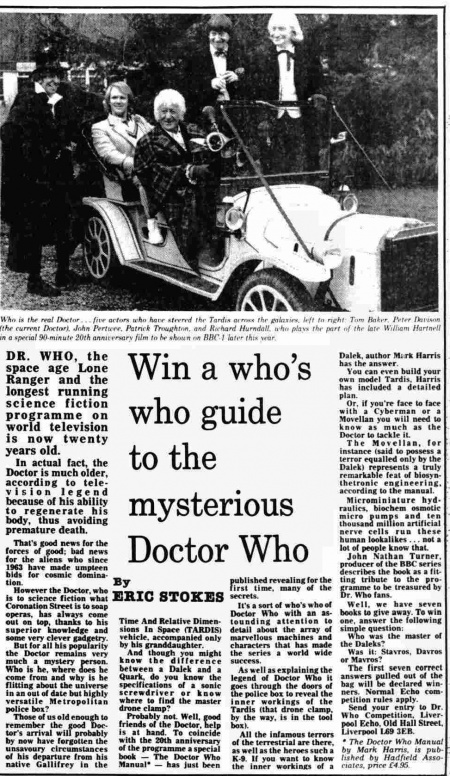 But it actually fact, the Doctor is much older, according to television legend because of his ability to regenerate his body, thus avoiding premature death.

However the Doctor, who is to science fiction what Coronation Street is to soap operas, has always come out on top, thanks to his superior knowledge and some very clever gadgetry.

But for all his popularity the Doctor remains very much a mystery person. Who is he, where does he come from and why is he flitting about the universe in an out of date but highly versatile Metropolitan police box?

Those of us old enough to remember the good Doctor's arrival will probably by now have forgotten the unsavoury circumstances from his native Gallifrey in the Time And Relative Dimensions In Space (TARDIS) vehicle, accompanied only by his granddaughter.

And though you might know the difference between the Daleks and a Quark, do you know the specifications of the sonic screwdriver Or no where to find the master drone clamp?

Probably not. Well, good friends of the Doctor, help is at hand. To coincide with the 20th anniversary of the programme a special book the -- The Doctor Who Manual -- has just been published and revealing many of the secrets.

It's a sort of who's who of Doctor Who with an astounding attention to detail about the array of marvelous machines and characters that has made the series of worldwide success.

As well as explaining the legend of Doctor Who it goes through the doors of the police box to reveal the inner workings of the TARDIS (that drone clamp, by the way, is in the tool box.)

All the infamous terrors of the terrestrial are there as well as the heroes such as K-9. If you want to know the inner workings of the Daleks, author Mark Harris has the answer.

You can even build your own TARDIS, Harris has included a detailed plan.

Or, if your face to face with the Cybermen or a Movellan you will need to know as much as the Doctor to tackle it.

The Movellan, for instance (said to process of terror equaled only by the Dalek) represents a truly remarkable feat of bios samaccording to the manual.

John Nathan Turner, producer of the BBC series describes the book as a fitting tribute to the program to be treasured by Dr. Who fans.

Well, we have seven books to give away. To win one, answer the following question:

Who is the master the Daleks?

Was it: Stavros, Davros or Mavros?

The first seven correct answers pulled out of the bag will be declared winners. Normal Echo competition rules apply.

The Doctor Who Manual by Mark Harris, is published by Hadfield Associates, price for £4.95.

Caption: Who is the real Doctor ... five actors who have starred the TARDIS across the galaxies, left to right: Tom Baker, Peter Davison (the current Doctor), John Pertwee, Patrick Troughton, and Richard Hurndall, who plays the part of the late William Hartnell in a special 90 minute 20th anniversary film to be shown on BBC-1 later this year.