Wit and charm and 'Dr. Who' 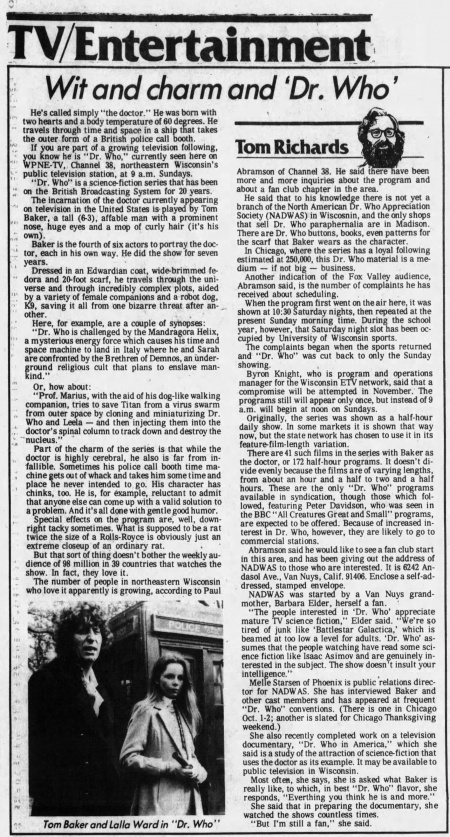 He's called simply "the doctor." He was born with two hearts and a body temperature of 60 degrees. He travels through time and space in a ship that takes the outer form of a British police call booth.

If you are part of a growing television following, you know he is "Dr. Who," currently seen here on WPNE-TV, Channel 38, northeastern Wisconsin's public television station, at 9 a.m. Sundays.

"Dr. Who" is a science-fiction series that has been on the British Broadcasting System for 20 years. The incarnation of the doctor currently appearing on television in the United States is. played by Tom Baker, a tall (6-3), affable man with a prominent nose, huge eyes and a mop of curly hair (it's his own).

Baker is the fourth of six actors to portray the doctor, each in his own way. He did the show for seven years.

Dressed in an Edwardian coat, wide-brimmed fedora and 20-foot scarf, he travels through the universe and through incredibly complex plots, aided by a variety of female companions and a robot dog, K9, saving it all from one bizarre threat after another.

Here, for example, are a couple of synopses:

"Dr. Who is challenged by the Mandragora Helix, a mysterious energy force which causes his time and space machine to land in Italy where he and Sarah are confronted by the Brethren of Demnos, an underground religious cult that plans to enslave mankind."

"Prof. Marius, with the aid of his dog-like walking companion, tries to save Titan from a virus swarm from outer space by cloning and miniaturizing Dr. Who and Leela — and then injecting them into the doctor's spinal column to track down and destroy the nucleus."

Part of the charm of the series is that while the doctor is highly cerebral, he also is far from infallible. Sometimes his police call booth time machine gets out of whack and takes him some time and place he never intended to go. His character has chinks, too. He is, for example, reluctant to admit that anyone else can come up with a valid solution to a problem. And it's all done with gentle good humor.

Special effects on the program are, well, downright tacky sometimes. What is supposed to be a rat twice the size of a Rolls-Royce is obviously just an extreme closeup of an ordinary rat.

But that sort of thing doesn't bother the weekly audience of 98 million in 39 countries that watches the show. In fact, they love it.

The number of people in northeastern Wisconsin who love it apparently is growing, according to Paul Abramson of Channel 38. He said t ere ave been more and more inquiries about the program and about a fan club chapter in the area.

He said that to his knowledge there is not yet a branch of the North American Dr. Who Appreciation Society (NADWAS) in Wiscosnin, and the only shops that sell Dr. Who paraphernalia are in Madison. There are Dr. Who buttons, books, even patterns for the scarf that Baker wears as the character.

In Chicago, where the series has a loyal following estimated at 250,000, this Dr. Who material is a medium — if not big — business.

Another indication of the Fox Valley audience, Abramson said, is the number of complaints he has received about scheduling.

When the program first went on the air here, it was shown at 10:30 Saturday nights, then repeated at the present Sunday morning time. During the school year, however, that Saturday night slot has been occupied by University of Wisconsin sports.

The complaints began when the sports returned and "Dr. Who" was cut back to only the Sunday showing.

Byron Knight, who is program and operations manager for the Wisconsin ETV network, said that a compromise will be attempted in November. The programs still will appear only once, but instead of 9 a.m. will begin at noon on Sundays.

Originally, the series was shown as a half-hour daily show. In some markets it is shown that way now, but the state network has chosen to use it in its feature-film-length variation.

There are 41 such films in the series with Baker as the doctor, or 172 half-hour programs. It doesn't divide evenly because the films are of varying lengths, from about an hour and a half to two and a half hours. These are the only "Dr. Who" programs available in syndication, though those which followed, featuring Peter Davidson, who was seen in the BBC "All Creatures Great and Small" programs, are expected to be offered. Because of increased interest in Dr. Who, however, they are likely to go to commercial stations.

Abramson said he would like to see a fan club start in this area, and has been giving out the address of NADWAS to those who are interested. It is 6242 Andasol Ave., Van Nuys, Calif. 91406. Enclose a self-addressed, stamped envelope.

NADWAS was started by a Van Nuys grandmother, Barbara Elder, herself a fan.

"The people interested in 'Dr. Who' appreciate mature TV science fiction," Elder said. "We're so tired of junk like 'Battlestar Galactica,' which is beamed at too low a level for adults. 'Dr. Who' assumes that the people watching have read some science fiction like Isaac Asimov and are genuinely interested in the subject. The show doesn't insult your intelligence."

Melle Starsen of Phoenix is public relations director for NADW AS. She has interviewed Baker and other cast members and has appeared at frequent "Dr. Who" conventions. (There is one in Chicago Oct. 1-2; another is slated for Chicago Thanksgiving weekend.)

She also recently completed work on a television documentary, "Dr. Who in America," which she said is a study of the attraction of science-fiction that uses the doctor as its example. It may be available to public television in Wisconsin.

Most often, she says, she is asked what Baker is really like, to which, in best "Dr. Who" flavor, she responds, "Everthing you think he is and more."

She said that in preparing the documentary, she watched the shows countless times.

Caption: Tom Baker and Lalla Ward in "Dr. Who"