Wood you believe it! 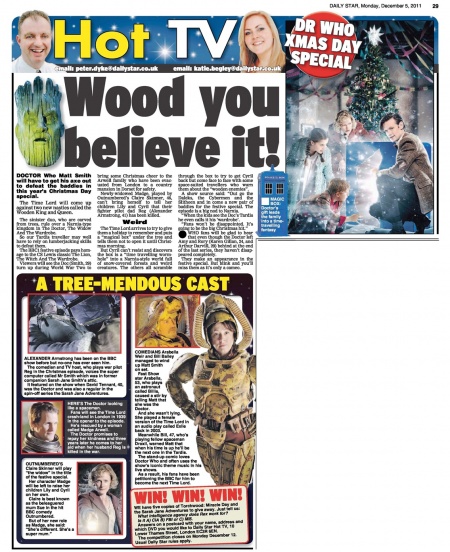 DOCTOR Who Matt Smith will have to get his axe out to defeat the baddies in this year's Christmas Day special.

The Time Lord will come up against two new nasties called the Wooden King and Queen.

The sinister duo, who are carved from trees, rule over a Narnia-type kingdom in The Doctor, The Widow And The Wardrobe.

So our Tardis traveller may well have to rely on lumberjacking skills to defeat them.

The BBC1 festive episode pays homage to the CS Lewis classic The Lion, The Witch And The Wardrobe.

Viewers will see the Doc (Smith, 29) turn up during World War Two to bring some Christmas cheer to the Arwell family who have been evacuated from London to a country mansion in Dorset for safety.

Newly-widowed Madge, played by Outnumbered's Claire Skinner, 46, can't bring herself to tell her children Lily and Cyril that their fighter pilot dad Reg (Alexander Armstrong, 41) has been killed.

The Time Lord arrives to try to give them a holiday to remember and puts a "magical box" under the tree and tells them not to open it until Christmas morning.

But Cyril can't resist and discovers the box is a "time travelling wormhole" into a Narnia-style world full of snow-covered forests and weird creatures. The others all scramble through the box to try to get Cyril back but come face to face with some space-suited travellers who warn them about the "wooden enemies".

A show source said: "Out go the Daleks, the Cybermen and the Slitheen and in come a new pair of baddies for the festive special. The episode is a big nod to Narnia. "When the kids see the Doc's Tardis he even calls it his 'wardrobe'.

"Fans won't be disappointed. It's going to be the big Christmas hit." AS WHO fans will be glad to hear W that even though the Doctor left Amy and Rory (Karen Gillan, 24, and Arthur Darvill, 29) behind at the end of the last series, they haven't disappeared completely.

They make an appearance in the festive special. But blink and you'll miss them as it's only a cameo.

ALEXANDER Armstrong has been on the BBC show before but no-one has ever seen him. The comedian and TV host, who plays war pilot Reg in the Christmas episode, voices the super computer called Mr Smith which was in former companion Sarah Jane Smith's attic.

It featured on the show when David Tennant, 40, was the Doctor and was also a regular in the spin-off series the Sarah Jane Adventures.

Fans will see the Time Lord crash-land in London in 1939 In the opener to the episode. He's rescued by a woman called Madge Arwell.

The Doctor promises to repay her kindness and three years later he comes to her aid when her husband Reg is killed in the war.

OUTNUMBERED'S Claire Skinner will play "the widow" in the title of the festive special. Her character Madge will be left to raise her children Lily and Cyril on her own.

Claire is best known as the beleaguered mum Sue in the hit BBC comedy Outnumbered.

But of her new role as Madge, she said: "She's different. She's a super mum."

Fast Show star Arabella, 53, who plays an astronaut called Billis, caused a stir by telling Matt that she was the Doctor.

And she wasn't lying. She played a female version of the Time Lord in an audio play called Exile back in 2003.

Meanwhile Bill, 47, who's playing fellow spaceman Droxil, warned Matt that when his time is up he'll be the next one in the Tardis. The stand-up comic loves Doctor Who and often uses the show's iconic theme music in his live shows.

As a result, his fans have been petitioning the BBC for him to become the next Time Lord.

WE have five copies of Torchwood: Miracle Day and the Sarah Jane Adventures to give away. Just tell us:

What intelligence agency does Rex work for?

Answers on a postcard with your name, address and which DVD you would like to Daily Star Hot TV, 10 Lower Thames Street, London EC3R 6EN.