He saves the world and BBC, then Dr Who quits 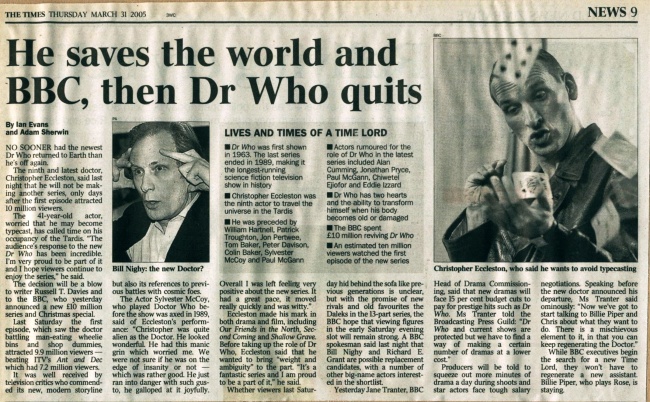 NO SOONER had the newest Dr Who returned to Earth than he's off again.

The ninth and latest doctor, Christopher Eccleston, said last night that he will not be making another series, only days after the first episode attracted 10 million viewers.

The 41-year-old actor, worried that he may become typecast, has called time on his occupancy of the Tardis. "The audience's response to the new Dr Who has been incredible. I'm very proud to be part of it and I hope viewers continue to enjoy the series," he said. The decision will be a blow to writer Russell T. Davies and to the BBC, who yesterday announced a new £10 million series and Christmas special. Last Saturday the first episode, which saw the doctor battling man-eating wheelie bins and shop dummies, attracted 9.9 million viewers —beating ITV's Ant and Dec which had 7.2 million viewers. It was well received by television critics who commended its new, modern storyline but also its references to previous battles with cosmic foes.

The Actor Sylvester McCoy, who played Doctor Who before the show was axed in 1989, said of Eccleston's performance: "Christopher was quite alien as the Doctor. He looked wonderful. He had this manic grin which worried me. We were not sure if he was on the edge of insanity or not —which was rather good. He just ran into danger with such gusto, he galloped at it joyfully.

Overall I was left feeling very positive about the new series. It had a great pace, it moved really quickly and was witty."

Eccleston made his mark in both drama and film, including Our Friends in the North, Second Coming and Shallow Grave. Before taking up the role of Dr Who, Eccleston said that he wanted to bring "weight and ambiguity" to the part. "It's a fantastic series and I am proud to be a part of it," he said.

Whether viewers last Saturday hid behind the sofa like previous regenerations is unclear, but with the promise of new rivals and old favourites the Dale's in the 13-part series, the BBC hope that viewing figures in the early Saturday evening slot will remain strong. A BBC spokesman said last night that Bill Nighy and Richard E. Grant are possible replacement candidates, with a number of other big-name actors interested in the shortlist.

Yesterday Jane Tranter, BBC Head of Drama Commissioning, said that new dramas will face 15 per cent budget cuts to pay for prestige hits such as Dr Who. Ms Tranter told the Broadcasting Press Guild: "Dr Who and current shows are protected but we have to find a way of making a certain number of dramas at a lower cost"

Producers will be told to squeeze out more minutes of drama a day during shoots and star actors face tough salary negotiations. Speaking before the new doctor announced his departure, Ms Tranter said ominously: "Now we've got to start talking to Billie Piper and Chris about what they want to do. There is a mischievous element to it, in that you can keep regenerating the Doctor." While BBC executives begin the search for a new Time Lord, they won't have to regenerate a new assistant Billie Piper, who plays Rose, is staying.

LIVES AND TIMES OF A TIME LORD

Caption: Christopher Eccleston, who said he wants to avoid typecasting