Oh Lord, he's still stuck in the past 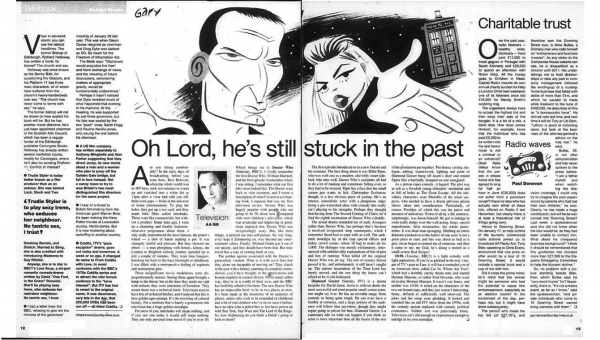 Are you sitting comfortably? In the early days of broadcasting, before you were born, Best Beloved, when the whole world was in 405 lines, took two minutes to warm up and vanished into a white dot at 11pm after a vicar had told you off, there were gaps -holes in the universe of home entertainment. To plug the holes, they put up a test card, and they made little films called interludes. These were like commercials, but without a product. Some time ago, I went on a charming and frankly bedroom-obsessive programme about them. I only really remembered the most famous, the potter's wheel -a shot of hands making a pot. It was strangely restful and pleasant. But they showed me others -a man ploughing with horses, kittens, the London to Brighton railway journey speeded up to just a couple of minutes. They were time bungees, hoicking me back to the hazy hindsight of childhood. I was filled with a retrospective feeling of euphoria and sentimental glee.

These insignificant movie madeleines were disproportionately intense. Seeing them again brought a lump to the throat, but at the time they made me sigh with tedium; they were interludes of boredom. They meant there was a technical hitch. Television used to have lots of technical hitches, and I realised that this is how golden ages emerge. It's the rewriting of cultural history. For a medium that is barely a generation old, television has a huge golden nostalgia.

For most of you, interludes will mean nothing, and if you saw one today it would still mean nothing. They are only personal time travel if you're over 50. Which brings me to Doctor Who (Saturday, BBC1). I vividly remember the first Doctor Who, William Hartnell, and the first episode. I remember where I was sitting, I remember what our first television looked like. The Doctor went back to visit cavemen, and I wrote a description of what I'd seen in a colouring book. I suppose that was my first television review. Doctor Who was hugely popular with people who are going to be 50 about now. Compared with most children's television, which was avuncular and improving or good, clean slapstick fun, Doctor Who was invigoratingly scary. But, like most things, it petered out into self-parody. Its very long-evity kept it Zimmering on, way beyond any entertainment values. Finally, Michael Grade put it out of our misery, and that should have been that. But time travel has a way of coming back at you.

The golden ageism associated with the Doctor is particularly virulent. What is it with sci-fi fans that they alone are incapable of moving on? They clutch at the past with a fantasy yearning in complete contradiction, you'd have thought, to the observations and lessons implicit in science fiction. Never mind: either way, they're in a world of their own, and the BBC has foolishly rebuilt it for them. The new Doctor Who has an impossible brief: to be in two places at once. It's been made at the insistence of an audience of ghosts, adults who wish to be reminded of childhood and a lot of real children who've never seen it before, have no idea what a police box is, but have grown up with Star Trek, Star Wars and The Lord of the Rings. So, how frightening do you think a Dalek's going to look to them?

The first episode introduced us to a new Doctor and his assistant. The best thing about it was Billie Piper, who was well cast as a modern, chavishly smart sidekick who runs well. Doctor Who's assistants all had to do a lot of running and sometimes falling over, so they had to be rescued.

Piper has a face that the small screen just wants to lick. Christopher Eccleston, though, is a less obvious piece of casting. He's an intense, naturalistic actor with a dangerous edge; being a pre-watershed alien with comedy bits really isn't playing to his strengths. Perhaps they thought that having done The Second Coming of Christ, he'd find the eighth incarnation of Doctor Who a doddle.

The actual drama reminded me of early Avengers rather than Doctor Who, but perhaps that's because it involved invigorated shop mannequins, which I remember Steed had to cope with as well. The authentic nostalgia lay in the crap special effects and hokey crowd scenes, where 10 had to make do for 1,000. The dialogue was mostly exclamatory, interspersed with unbelievable explanations of bits of plot and lots of running.

What killed off the original Doctor Who was jet lag. The rest of science fiction passed it by, and unfortunately it still hasn't caught up. The current incarnation of the Time Lord has barely moved, and the one thing the future can't afford to be is old fashioned.