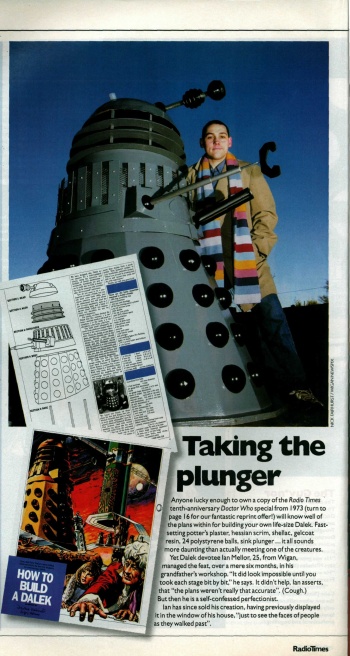 Anyone lucky enough to own a copy of the Radio Times tenth-anniversary Doctor Who special from 1973 (turn to page 16 for our fantastic reprint offer!) will know well of the plans within for building your own life-size Dalek. Fast-setting potter's plaster, hessian scrim, shellac, gelcoat resin, 24 polystyrene balls, sink plunger... it all sounds more daunting than actually meeting one of the creatures.

Yet Dalek devotee Ian Mellor, 25, from Wigan, managed the feat, over a mere six months, in his grandfather's workshop. "It did look impossible until you took each stage bit by bit," he says. It didn't help, Ian asserts, that "the plans weren't really that accurate". (Cough.) But then he is a self-confessed perfectionist.

Ian has since sold his creation, having previously displayed it in the window of his house, "just to see the faces of people as they walked past".