The Whos' Who's Who 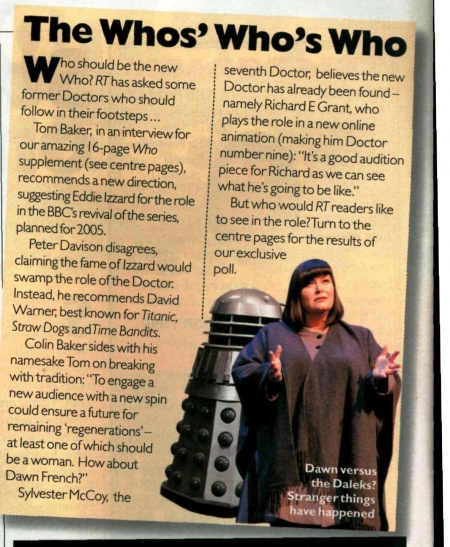 Who should be the new Who? RT has asked some former Doctors who should follow in their footsteps ...

Tom Baker; in an interview for our amazing 16-page Who supplement (see centre pages), recommends a new direction, suggesting Eddie Izzard for the role in the BBC's revival of the series, planned for 2005.

Peter Davison disagrees, claiming the fame of Izzard would swamp the role of the Doctor. Instead, he recommends David Warner; best known for Titanic, Straw Dogs and Time Bandits. Colin Baker sides with his namesake Tom on breaking with tradition: "To engage a new audience with a new spin could ensure a future for remaining 'regenerations'—at least one of which should be a woman. How about Dawn French?"

Sylvester McCoy, the seventh Doctor; believes the new Doctor has already been found — namely Richard E Grant, who plays the role in a new online animation (making him Doctor number nine): "It's a good audition piece for Richard as we can see what he's going to be like."

But who would RT readers like to see in the role? Turn to the centre pages forthe results of our exclusive poll.

Caption: Dawn versus the Daleks? Stranger things have happened