For Whovians, 'Time Eddy II' is what the Doctor ordered 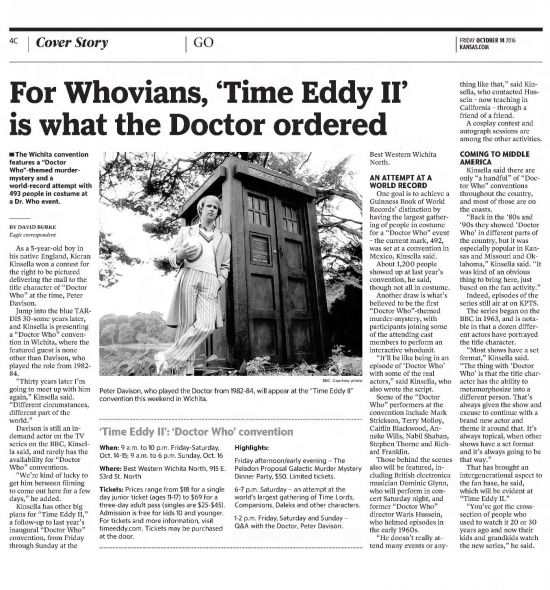 The Wichita convention features a "Doctor Who"-themed murder-mystery and a world-record attempt with 493 people in costume at a Dr. Who event.

As a 5-year-old boy in his native England, Kieran Kinsella won a contest for the right to be pictured delivering the mail to the title character of "Doctor Who" at the time, Peter Davison.

Jump into the blue TARDIS 30-some years later, and Kinsella is presenting a "Doctor Who" convention in Wichita, where the featured guest is none other than Davison, who played the role from 1982-84.

"Thirty years later I'm going to meet up with him again," Kinsella said. "Different circumstances, different part of the world."

Davison is still an in-demand actor on the TV series on the BBC, Kinsella said, and rarely has the availability for "Doctor Who" conventions.

"We're kind of lucky to get him between filming to come out here for a few days," he added.

Kinsella has other big plans for "Time Eddy II," a follow-up to last year's inaugural "Doctor Who" convention, from Friday through Sunday at the Best Western Wichita North.

AN ATTEMPT AT A WORLD RECORD

One goal is to achieve a Guinness Book of World Records' distinction by having the largest gathering of people in costume for a "Doctor Who" event - the current mark, 492, was set at a convention in Mexico, Kinsella said.

About 1,200 people showed up at last year's convention, he said, though not all in costume.

Another draw is what's believed to be the first "Doctor Who"-themed murder-mystery, with participants joining some of the attending cast members to perform an interactive whodunit.

"It'll be like being in an episode of 'Doctor Who' with some of the real actors," said Kinsella, who also wrote the script.

Some of the "Doctor Who" performers at the convention include Mark Strickson, Terry Molloy, Caitlin Blackwood, Anneke Wills, Nabil Shaban, Stephen Thorne and Richard Franklin.

Those behind the scenes also will be featured, including British electronica musician Dominic Glynn, who will perform in concert Saturday night, and former "Doctor Who" director Waris Hussein, who helmed episodes in the early 1960s.

"He doesn't really attend many events or any thing like that," said Kinsella, who contacted Hussein - now teaching in California - through a friend of a friend.

A cosplay contest and autograph sessions are among the other activities.

Kinsella said there are only "a handful" of "Doctor Who" conventions throughout the country, and most of those are on the coasts.

"Back in the '80s and '90s they showed 'Doctor Who' in different parts of the country, but it was especially popular in Kansas and Missouri and Oklahoma," Kinsella said. "It was kind of an obvious thing to bring here, just based on the fan activity."

Indeed, episodes of the series still air at on KPTS.

The series began on the BBC in 1963, and is notable in that a dozen different actors have portrayed the title character.

That has brought an intergenerational aspect to the fan base, he said, which will be evident at "Time Eddy II."

"You've got the cross-section of people who used to watch it 20 or 30 years ago and now their kids and grandkids watch the new series," he said.

Caption: Peter Davison, who played the Doctor from 1982-84, will appear at the "Time Eddy II" convention this weekend in Wichita.

Tickets: Prices range from $18 for a single day junior ticket (ages 11-17) to $69 for a three-day adult pass (singles are $25-$45). Admission is free for kids 10 and younger. For tickets and more information, visit timeeddy.com. Tickets may be purchased at the door.

6-7 p.m. Saturday - an attempt at the world's largest gathering of Time Lords, Companions, Daleks and other characters.