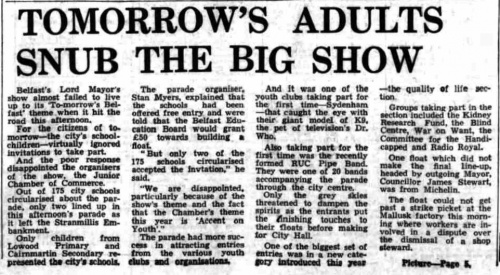 Belfast's Lord Mayor's show almost failed to live up to its 'To-morrow's Belfast' theme when it hit the road this afternoon.

For the citizens of tomorrow—the city's school-children—virtually ignored invitations to take part.

And the poor response disappointed the organisers of the show, the Junior Chamber of Commerce.

Out of 175 city schools circularised about the parade, only two lined up in this afternoon's parade as it left the Stranmillis Embankment.

Only children from Lowood Primary and Cairrunartin Secondary represented the city's schools.

The parade organiser, Stan Myers, explained that the schools had been offered free entry and were told that the Belfast Education Board would grant £50 towards building a float.

"But only two of the 175 schools circularised accepted the invitation," he said.

"We are disappointed, particularly because of the show's theme and the fact that the Chamber's theme this year is 'Accent on Youth'."

The parade had more success in attracting entries from the various youth clubs and organisations.

And it was one of the youth clubs taking part for the first time—Sydenham —that caught the eye with their giant model of K9. the pet of television's Dr. Who.

Also taking part for the first time was the recently formed RUC Pipe Band. They were one of 20 bands accompanying the parade through the city centre.

Only the grey skies threatened to dampen the spirits as the entrants put the finishing touches to their floats before making for City Hall.

One of the biggest set of entries was in a new category introduced this year—the quality of life section.

Groups taking part in the section included the Kidney Research Fund, the Blind Centre, War on Want, the Committee for the Handicapped and Radio Royal.

One float which did not make the final line-up, headed by outgoing Mayor, Councillor James Stewart, was from Michelin.

The float could not get past a strike picket at the Mallusk factory this morning where workers are involved in a dispute over the dismissal of a shop steward.