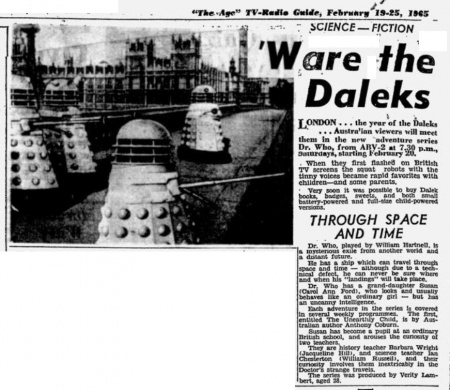 LONDON ... the year of the Daleks ... Australian viewers will meet them in the new adventure series Dr. Who, from ABN-2 at 7.30 p.m., Saturdays, starting February 20.

When they first flashed on British TV screens the squat robots with the tinny voices became rapid favorites with children—and some parents.

Very soon it was possible to buy Dalek books, badges, sweets. and both small battery-powered and full-site child-powered versions.

THROUGH SPACE AND TIME

Dr. Who, played by William Hartnell, is a mysterious exile from another world and a distant suture.

He has a ship which can travel through space and time — although due to a technical defect, he can never be sure where and when his "landings" will take place.

Dr. Who has a grand-daughter Susan (Carol1 Ann Ford), who looks and usually behaves like an ordinary girl — but has an uncanny intelligence.

Each adventure in the series is covered in several weekly programmes. The first, entitled The Unearthly Child, is by Australian author Anthony Coburn.

Susan has become a pupil at an ordinary British school, and arouses the curiosity of two teachers.

They are history teacher Barbara Wright (Jacqueline Hill), and science teacher Ian Chesterton (William Russell), and their curiosity involves them inextricably in the Doctor's strange travels.

The series was produced by Verity Lambert, aged 28.