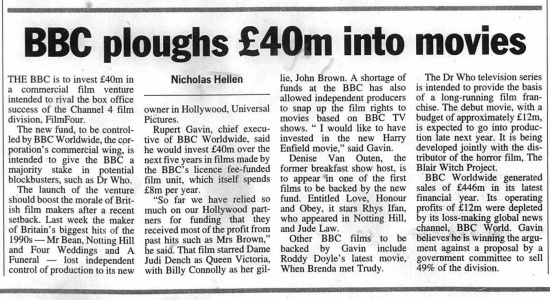 THE BBC is to invest Pounds 40m in a commercial film venture intended to rival the box office success of the Channel 4 film division, FilmFour.

The new fund, to be controlled by BBC Worldwide, the corporation's commercial wing, is intended to give the BBC a majority stake in potential blockbusters, such as Dr Who.

The launch of the venture should boost the morale of British film makers after a recent setback. Last week the maker of Britain's biggest hits of the 1990s - Mr Bean, Notting Hill and Four Weddings and A Funeral - lost independent control of production to its new owner in Hollywood, Universal Pictures.

Rupert Gavin, chief executive of BBC Worldwide, said he would invest Pounds 40m over the next five years in films made by the BBC's licence fee-funded film unit, which itself spends Pounds 8m per year.

"So far we have relied so much on our Hollywood partners for funding that they received most of the profit from past hits such as Mrs Brown," he said. That film starred Dame Judi Dench as Queen Victoria, with Billy Connolly as her gillie, John Brown. A shortage of funds at the BBC has also allowed independent producers to snap up the film rights to movies based on BBC TV shows. " I would like to have invested in the new Harry Enfield movie," said Gavin.

Denise Van Outen, the former breakfast show host, is to appear in one of the first films to be backed by the new fund. Entitled Love, Honour and Obey, it stars Rhys Ifan, who appeared in Notting Hill, and Jude Law.

Other BBC films to be backed by Gavin include Roddy Doyle's latest movie, When Brenda met Trudy.

The Dr Who television series is intended to provide the basis of a long running film franchise. The debut movie, with a budget of approximately Pounds 12m, is expected to go into production late next year. It is being developed jointly with the distributor of the horror film, The Blair Witch Project.

BBC Worldwide generated sales of Pounds 446m in its latest financial year. Its operating profits of Pounds 12m were depleted by its loss-making global news channel, BBC World. Gavin believes he is winning the argument against a proposal by a government committee to sell 49% of the division