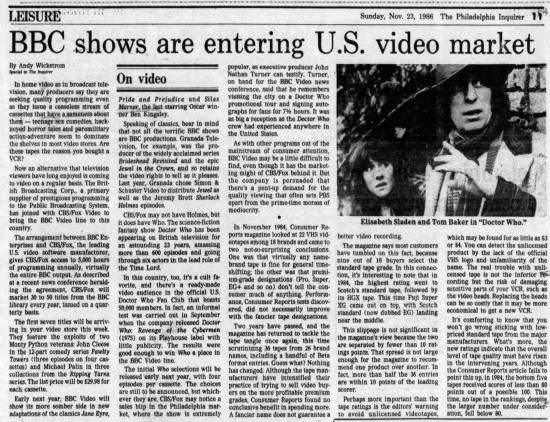 In home video as in broadcast television, many producers say they are seeking quality programming even as they issue a ceaseless stream of cassettes that have a sameness about them — teenage sex comedies, hackneyed horror tales and paramilitary action-adventure seem to dominate the shelves in most video stores. Are these tapes the reason you bought a VCR?

Now an alternative that television viewers have long enjoyed is coming to video on a regular basis. The British Broadcasting Corp., a primary supplier of prestigious programming to the Public Broadcasting System, has joined with CBS/Fox Video to bring the BBC Video line to this country.

The arrangement between BBC Enterprises and CBS/Fox, the leading U.S. video software manufacturer, gives CBS/Fox access to 5,000 hours of programming annually, virtually the entire BBC output. As described at a recent news conference heralding the agreement, CBS/Fox will market 30 to 50 titles from the BBC library every year, issued on a quarterly basis.

The first seven titles will be arriving in your video store this week. They feature the exploits of two Monty Python veterans: John Cleese in the 12-part comedy series Fawlty Towers (three episodes on four cassettes) and Michael Palin in three collections from the Ripping Yarns series. The list price will be $29.98 for each cassette.

Early next year, BBC Video will show its more somber side in new adaptations of the classics Jane Eyre,

Speaking of classics, bear in mind that not all the terrific BBC shows are BBC productions. Granada Television, for example, was the producer of the widely acclaimed series Brideshead Revisited and the epic Jewel in the Crown, and so retains the video rights to sell as it pleases. Last year, Granada chose Simon & Schuster Video to distribute Jewel as well as the Jeremy Brett Sherlock Holmes episodes.

CBS/Fox may not have Holmes, but it does have Who. The science-fiction fantasy show Doctor Who has been appearing on British television for an astounding 23 years, amassing more than 600 episodes and going through six actors in the lead role of the Time Lord.

In this country, too, it's a cult favorite, and there's a ready-made video audience in the official U.S. Doctor Who Fan Club that boasts 50,000 members. In fact, an informal test was carried out in September when the company released Doctor Who: Revenge of the Cybermen (1975) on its Playhouse label with little publicity. The results were good enough to win Who a place in the BBC Video line.

The initial Who selections will be released early next year, with four episodes per cassette. The choices are still to be announced, but whichever they are, CBS/Fox may notice a sales blip in the Philadelphia market, where the show is extremely popular, as executive producer John Nathan Turner can testify. Turner, on hand for the BBC Video news conference, said that he remembers visiting the city on a Doctor Who promotional tour and signing autographs for fans for 7 1/2 hours. It was as big a reception as the Doctor Who crew had experienced anywhere in the United States.

As with other programs out of the mainstream of consumer attention, BBC Video may be a little difficult to find, even though it has the marketing might of CBS/Fox behind it. But the company persuaded that there's a pent-up demand for the quality viewing that often sets PBS apart from the prime-time morass of mediocrity.

Caption: Elisabeth Sladen and Tom Baker in "Doctor Who."