Bald-Headed for Dr. Who 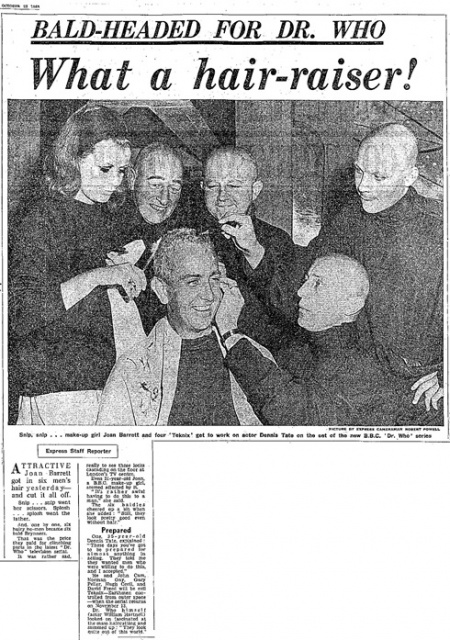 Snip, snip ... make-up girl Joan Barrett and four 'Teknix' get to work on actor Dennis Tate on the set of the new B.B.C. 'Dr. Who' series

ATTRACTIVE Joan Barrett got in six men's hair yesterday and cut it all off.

And one by one, six hairy he-men became six bald Brynners.

That was the price they paid for clinching parts in the latest "Dr. Who" television serial.

It was rather sad, really to see those locks cascading on the floor at London's TV centre.

"It's rather awful having to do this to a man,' she said.

The six baldies cheered up a bit when she added : "Still, they look pretty good even without hair."

One, 55-year-old Dennis Tate, explained : "These days you've got to be prepared for almost anything in acting. They told me they wanted men who were willing to do this, and I accepted."

He and John Cam, Norman Gay, Gary Feller, Hugh Cecil, and David Freed will be evil Teknix — Earthmen controlled from outer space — when the serial returns on November 13.

Dr. Who himself (actor William Hartnell) looked on fascinated at the mass haircutting and summed up: "They look quite out of this world."