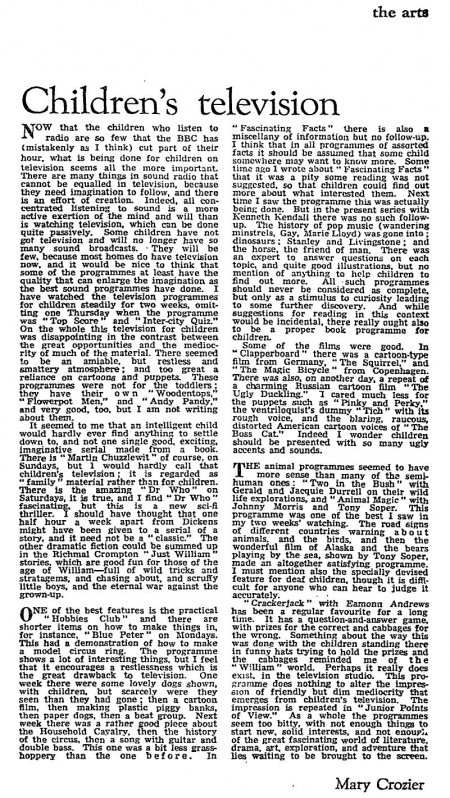 NOW that the children who listen to radio are so few that the BBC has (mistakenly as I think) cut part of their hour, what is being done for children on television seems all the more important. There are many things in sound radio that cannot be equalled in television, because they need imagination to follow, and there is an effort of creation. Indeed, all concentrated listening to sound is a more active exertion of the mind and will than is watching television, which can be done quite passively. Some children have not got television and will no longer have so many sound broadcasts. They will be few, because most homes do have television now, and it would be nice to think that some of the programmes at least have the quality that can enlarge the imagination as the best sound programmes have done. I have watched the television programmes for children steadily for two weeks, omitting one Thursday when the programme was "Top Score" and "Inter-city Quiz." On the whole this television for children was disappointing in the contrast between the great opportunities and the mediocrity of much of the material. There seemed to be an amiable, but restless and smattery atmosphere ; and too great a reliance on cartoons and puppets. These programmes were not for the toddlers ; they have their own " Woodentops," "Flowerpot Men," and " Andy Pandy," and very good, too. but I am not writing about them.

It seemed to me that an intelligent child would hardly ever find anything to settle down to, and not one single good, exciting, imaginative serial made from a book. There is "Martin Chuzzlewit" of course, on Sundays, but 1 would hardly call that children's television ; it is regarded as "family" material rather than for children. There is the amazing "Dr Who" on Saturdays, it is true, and I find "Dr Who" fascinating, but this is a new sci-fi thriller. I should have thought that one half hour a week apart from Dickens might have been given to a serial of a story, and it need not be a "classic." The other dramatic fiction could be summed up in the Richmal Crompton "Just William" stories, which are good fun for those of the age of William—full of wild tricks and stratagems, and chasing about, and scruffy little boys, and the eternal war against the grown-up.

ONE of the best features is the practical " Hobbies Club " and there are shorter items on how to make things in, for instance, "Blue Peter" on Mondays. This bad a demonstration of how to make a model circus ring. The programme shows a lot of interesting things, but I feel that it encourages a restlessness which is the great drawback to television. One week there were some lovely dogs shown, with children, but scarcely were they seen than they had gone; then a cartoon film, then making plastic piggy banks, then paper dogs, then a beat group. Next week there was a rather good piece about the Household Cayalry, then the history of the circus, then a song with guitar and double bass. This one was a bit less grass-hoppery than the one b e f ore. In " Fascinating Facts " there is also a miscellany of information but no follow-up. I think that in all programmes of assorted facts it should be assumed that some child somewhere may want to know more. Some time ago I wrote about " Fascinating Facts" that it was a pity some reading was not suggested, so that children could find out more about what interested them. Next time I saw the programme this was actually being done. But in the present series with Kenneth Kendall there was no such follow-up. The history of pop music (wandering minstrels, Gay, Marie Lloyd) was gone into ; dinosaurs ; Stanley and Livingstone ; and the horse, the friend of man. There was an expert to answer questions on each topic, and quite good illustrations, but no mention of anything to help children to find out more. All • such programmes should never be considered as complete, but only as a stimulus to curiosity leading to some further discovery. And while suggestions for reading in this context would be incidental, there really ought also to be a proper book programme for children.

Some of the films were good. In " Clapperboard" there was a cartoon-type film from Germany, "The Squirrel," and " The Magic Bicycle " from Copenhagen. There was also, on another day, a repeat of a charming Russian cartoon film "The Ugly Duckling." I cared much less for the puppets such as "Pinky and Perky," the ventriloquist's dummy "Tick" with its rough voice, and the blaring, raucous, distorted American cartoon voices of " The Boss Cat." Indeed I wonder children should be presented with so many ugly accents and sounds.

THE animal programmes seemed to have more sense than many of the semi-human ones : "Two in the Bush " with Gerald and Jacquie Durrell on their wild life explorations, and " Animal Magic" with Johnny Morris and Tony Soper. This programme was one of the best I saw in my two weeks' watching. The road signs of different countries warning about animals, and the birds, and then the wonderful film of Alaska and the bears playing by the sea, shown by Tony Soper, made an altogether satisfying programme. I must mention also the specially devised feature for deaf children, though it is difficult for anyone who can hear to judge it accurately.

"Crackerjack" with Eamonn Andrews has been a regular favourite for a long time. It has a question-and-answer game, with prizes for the correct and cabbages for the wrong. Something about the way this was done with the children standing there in funny hats trying to hold the prizes and the cabbages reminded me of the "William" world. Perhaps it really does exist, in the television studio. This programme does nothing to alter the impression of friendly but dim mediocrity that emerges from children's television. The impression is repeated in "Junior Points of View." As a whole the programmes seem too bitty, with not enough things to start new, solid interests, and not enough. of the great fascinating world of literature, drama, art, exploration, and adventure that lies waiting to be brought to the screen.