Children of the violent box 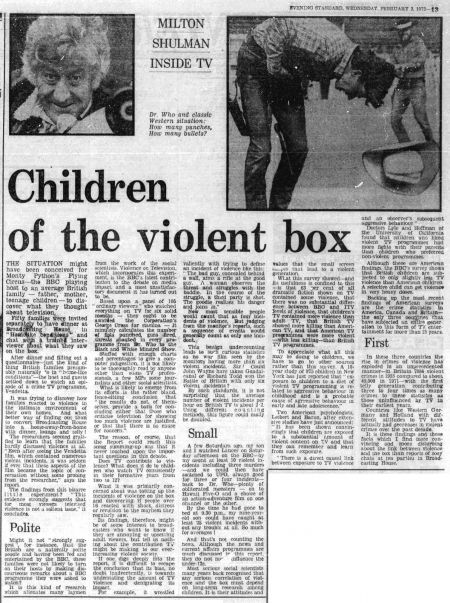 THE SITUATION might have been conceived for Monty Python's Flying Circus—the BBC playing host to an average British family -- father, mother, teenage children — to discover what they thought about television.

Fifty families were invited separately to have dinner at Broadcasting House in "Homelike conditions" and chat with a trained interviewer about what they saw on the box.

After dinner and filling out a questionnaire—just the kind of thing British families presumably naturally do in "home-like conditions"—the host and guests settled down to watch an episode of a crime TV programme, Vendetta.

It was trying to discover how families reacted to violence in the intimate environment of their own homes. And what better way of finding out than to convert Broadcasting House into a home-away-from-home with dinner, lounge and telly !

The researchers seemed gratified to learn that the families hardly discussed violence et all. "Even after seeing the Vendetta film, which contained numerous violent incidents, it was seldom if ever that these aspects of the film became the topic of conversation without some probing from the researcher." says the report.

The findings from this bizarre little experiment ? "This evidence strongly suggests that for most viewers televised violence is not a salient issue," it concludes.

Might it not "strongly suggest ", for instance, that the British are a naturally polite people and having been fed and entertained by the BBC, these families were not likely to turn on their hosts by making discourteous remarks about a BBC programme they were asked to watch?

It is this kind of research which alienates many -laymen from the work of the social scientists. Violence on Television, which incorporates this experiment, is the BBC's latest contribution to the debate on media impact, and a most unsatisfactory document it has turned out to be.

Based upon a panel of 105 "ordinary viewers" who watched everything on TV for six solid months — they ought to be awarded the Corporation's George Cress for stamina — it minutely calculates the number of fists punched, guns fired. threats shouted in every programme from Dr. Who to the Black and White Minstrel Show.

Stuffed with enough charts and percentages to give a computer indigestion, it is not likely to be thoroughly read by anyone other than some TV professionals, a few MPs some journalists and other social scientists.

What is likely to emerge from its efforts is the rather bland, fence-sitting conclusion that " the results do not, of themselves, provide a basis for concluding either that those who criticise television for showing too much violence are justified, or that that there is no cause for concern."

The reason, of course, that the Report could reach this smug summing-up was that it never touched upon the important questions in this debate.

Does TV contribute to violence? What does it do to children who watch TV consistently in their formative years from two to 12?

What it was primarily concerned about was totting up the incidents of violence on the box and discovering if people over 16 reacted with shock, distress or revulsion to the mayhem they regularly saw.

Its findings, therefore, might be of some interest to broadcasters who want to know if they are annoying or upsetting adult viewers, but tell us nothing about the contribution TV might be making to our ever-increasing violent society.

If one, digs deeply into the report, it is difficult to escape the conclusion that its bias, no doubt inadvertently, is towards understating the amount of TV violence and 'denigrating its impact.

For example, it wrestled valiently with trying to define an incident of violence like this: The bad guy, concealed behind a wall, aims a rifle at the good guy. A woman observes the threat and struggles with the baddie. In the course of the struggle, a third party is shot. The goodie realises his danger and joins in."

New most sensible people would count that as four incidents of violence. But judging from the menace's reports, such a sequence of events would generally count as only one incident.

By such standards, it is not surprising that the average number of violent incidents per hour on British TV is about 2.2. Using different counting methods, this figure could easily be doubled.

A few Saturdays ago, my son and I watched Lancer on Saturday afternoon on the BBC—by my count at least 10 violent incidents including three murders —and we could then have switched to UFO, always good for three or, four incidents—back to Dr. Who—plenty of obliterated monsters — on to Hawaii Five-0 and a choice of an action-adventure film on one channel or the other.

By the time he had gone to bed at 9.30 p.m., my nine-year-old son could have caught at least 25 violent incidents without any trouble at all. So much for averages

And that's not counting the news, Although the news and current affairs programmes are much discussed in this report, they do not much influence the under-12s.

Most serious social scientists many years back recognised that any serious correlation of violence and the box must depend on long-term research among children. It is their attitudes and values that the small screen shapes that lead to a violent generation.

What this survey showed—and its usefulness is confined to this —is that 63 per cent of all dramatic fiction shown on TV contained some violence, that there was no substantial difference between BBC and ITV revels of violence, that children's TV contained more violence than adult TV, that British TV showed more killing than American TV, and that American TV programmes were more violent —with less killing—than British TV programmes.

To appreciate what all this may be doing to children, we have to go to other sources rather than this survey. A 10-year study of 875 children in New York has just reported that "exposure to children to a diet of violent TV programming is related to aggressive behaviour in childhood and is a probable cause of agrressive behaviour in early and late adolescence."

Two American psychologists, Leibert and Baron, after extensive studies have just announced: "It has been shown convincingly that children are exposed to a substantial amount of violent content on TV and that. they can remember and learn from such exposure.

Doctors Lyle and Hoffman of the University of California found that children wno liked violent TV programmes had more fights with their parents than children who preferred non-violent programmes.

Although these are American findings, the BBC's survey shows that British children are subjected to only slightly less TV violence than American children A selective child can get violence in very heavy doses.

Backing up the most recent findings of American surveys are the crime statistics in America, Canada and Britain—the only three countries that have subjected an entire generation to this form of TV entertainment for more than 15 years.

In these three countries the rise in crimes of violence has exploded in an unprecedented manner—in Britain 7884 violent crimes in 1955 compared to about 45,000 in 1971—with the first telly generation contributing three to four times as many crimes to these statistics as those uninfluenced by TV in their earliest years.

Countries like Western Germany and Holland with different attitudes to TV have actually had decreases in violent crimes over the past decade.

It is these findings and these facts which I find more convincing and more disturbing about the link between violence and the box than reports of cosy chats at tea parties in Broadcasting House.

Caption: Dr. Who and classic Western situation: How many punches. How many bullets?