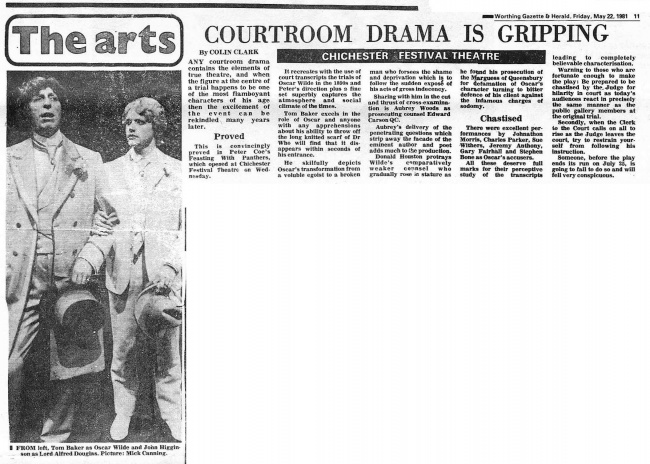 ANY courtroom drama contains the elements of true theatre, and when the figure at the centre of a trial happens to be one of the most flamboyant characters of his age then the excitement of the event can be rekindled many years later.

This is con vincingly proved in Peter Coe's Feasting With Panthers, which opened at Chichester Festival Theatre on Wednesday.

It recreates with the use of court transcripts the trials of Oscar Wilde in the Mhos and Peter's direction plus a fine set superbly captures the atmosphere and social climate of the times.

Tom Baker excels in the role of Oscar and anyone with any apprehensions about his ability to throw off the long knitted scarf of Dr Who will find that it disappears within seconds of his entrance.

He skilfully depicts Oscar's transformation from a voluble egoist to a broken man who loners the shame and deprivation which is to follow the sudden expose of his acts of gross indecency. Sharing with him In the cut and thrust of cross-examination is Aubrey Woods as prosecuting counsel Edward Carson QC.

Aubrey's delivery of the penetrating questions which strip away the facade of the eminent author and poet adds much to the production. Donald Houston protrays Wilde's comparatively weaker counsel who gradually rose in stature as he found his prosecution of the Marguess of Queensbury for defamation of Oscar's character turning to bitter defence of his client against the Infamous charges of sodomy.

There were excellent performances by Johnathon Morris, Charles Parker, Sue Withers, Jeremy Anthony, friary Fairhall and Stephen Bone as Oscar's accusers. All these deserve full marks for their perceptive study of the transcripts leading to completely believable characterisation. Warning to those who are fortunate enough to make the play: Be prepared to be chastised by the. Judge for hilarity in court as today's audiences react In precisely the same manner as the public gallery members at the original trial.

Secondly, when the Clerk to the Court calls on all to rise as the Judge leaves the court, try to restrain yourself from following his Instruction.

Someone, before the play ends its run on July 25, is going to fail to do so and will fell very conspicuous.