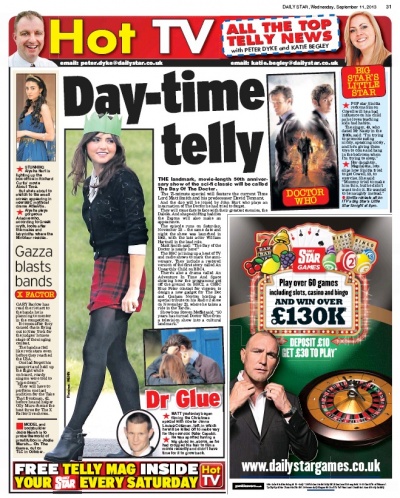 The landmark, movie-length 50th anniversary show of the sci-fi classic will be called The Day of the Doctor.

The 75-minute special will feature the current Time Lord Mat Smith and his predecessor David Tennant.

And the duo will be joined by John Hurt who plays an incarnation of The Doctor he had tried to forget.

They will come face to face with their greatest enemies, The Daleks. And shape-shifting baddies the Zygons will also make an appearance.

The episode runs on Saturday November 23 -- the same date and night the show was launched in 1963, with the late actor William Hartnell in the lead role.

Matt Smith said: "The Day of the Doctor is nearly here!"

The BBC is lining up a host of TV and radio shows to mark the anniversary. They include a restore version of the first story called An Unearthly Story on BBC4.

There's also a drama called An Adventure In Time And Space showing how the programme got off the ground on BBC2, a CBBC Blue Peter contest for viewers to design a new gadget for The Doc and Graham Norton hosting a special tribute on his Radio 2 show on November 23, where he takes a ride in the Tardis.

Show boss Steven Moffatt said: "50 years has turned Doctor Who from a television show into a cultural landmark."

Matt yesterday's began filming the Christmas special with costar Jenna Louise Coleman, left, in which he will be killed off to make way for the new doc Peter Capaldi.

He was spotted having a wig glued on, above, as he had cropped his hair to film a movie recently and didn't have time for it to grow back.