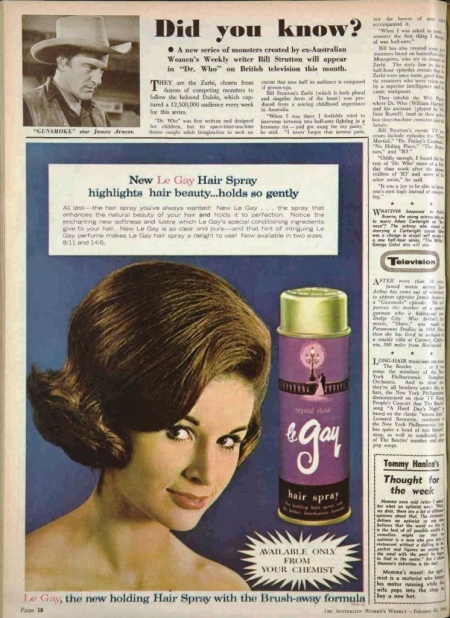 A new series of monsters created by ex-Australian Women's Weekly writer Bill Strutton will appear in "Dr. Who" on British television this month.

THEY are the Zarbi, chosen from dozens of competing monsters to follow the beloved Daleks, which captured a 12,500,000 audience every week for this series.

"Dr. Who" was first written and designed for children, but its space-time-machine theme caught adult imagination to such an extent that now half its audience is composed of grown-ups.

Bill Strutton's Zarbi (which is both plural and singular form of the beast) was produced from a searing childhood experience in Australia.

"When I was there I foolishly tried to intervene between two bull-ants fighting in a kerosene tin—and got stung for my pains," he said. "I never forgot that intense pain, nor the horror of ants which accompanied it.

"When I was asked to create a monster the first thing I though of was bull-ants."

Bill has also created some monsters based on butterflies called Menoptera, who try to thwart the Zarbi. The story line in the half-hour episodes reveals that the Zarbi were once tame, good domestic creatures who were taken over by a superior intelligence and became malignant.

They inhabit the Web Planet, where Dr. Who (William Hartnell and his assistant (played by William Russell) land in their police box time-machine centuries into the future.

"Oddly enough, I found the fantasy of 'Dr. Who' more of a holiday than work after the intense realism of 'R3' and some of the other series," he said.