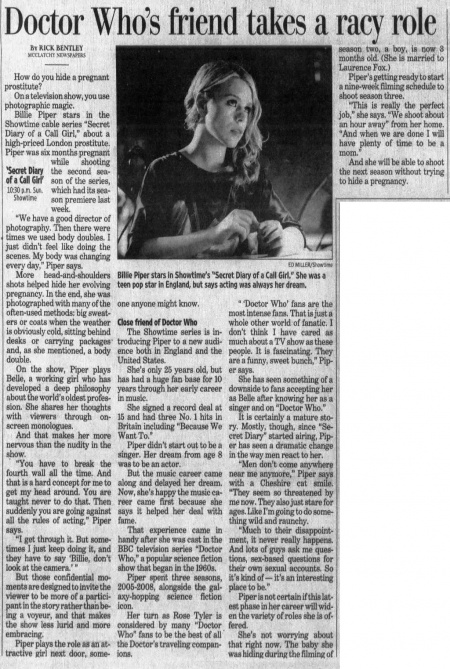 How do you hide a pregnant prostitute?

On a television show, you use photographic magic.

Billie Piper stars in the Showtime cable series "Secret Diary of a Call Girl," about a high-priced London prostitute. Piper was six months pregnant while shooting the second sea son of the series, which had its season premiere last week.

"We have a good director of photography. Then there were times we used body doubles. I just didn't feel like doing the scenes. My body was changing every day," Piper says.

More head-and-shoulders shots helped hide her evolving pregnancy. In the end, she was photographed with many of the often-used methods: big sweaters or coats when the weather is obviously cold, sitting behind desks or carrying packages and, as she mentioned, a body double.

On the show, Piper plays Belle, a working girl who has developed a deep philosophy about the world's oldest profession. She shares her thoughts with viewers through onscreen monologues.

And that makes her more nervous than the nudity in the show.

"You have to break the fourth wall all the time. And that is a hard concept for me to get my head around. You are taught never to do that. Then suddenly you are going against all the rules of acting," Piper says.

"I get through it. But sometimes I just keep doing it, and they have to say 'Billie, don't look at the camera.' "

But those confidential moments are designed to invite the viewer to be more of a participant in the story rather than being a voyeur, and that makes the show less lurid and more embracing.

Piper plays the role as an attractive girl next door, someone anyone might know.

Close friend of Doctor Who

The Showtime series is introducing Piper to a new audience both in England and the United States.

She's only 25 years old, but has had a huge fan base for 10 years through her early career in music.

She signed a record deal at 15 and had three No. 1 hits in Britain including "Because We Want To."

Piper didn't start out to be a singer. Her dream from age 8 was to be an actor.

That experience came in handy after she was cast in the BBC television series "Doctor Who," a popular science fiction show that began in the 1960s.

Her turn as Rose Tyler is considered by many "Doctor Who fans to be the best of all the Doctor's traveling companions.

"'Doctor Who' fans are the most intense fans. That is just a whole other world of fanatic. I don't think I have cared as much about a TV show as these people. It is fascinating. They are a funny, sweet bunch," Piper says.

She has seen something of a downside to fans accepting her as Belle after knowing her as a singer and on "Doctor Who."

It is certainly a mature story. Mostly, though, since "Secret Diary" started airing, Piper has seen a dramatic change in the way men react to her.

"Men don't come anywhere near me anymore," Piper says with a Cheshire cat smile. "They seem so threatened by me now. They also just stare for ages. Like I'm going to do something wild and raunchy.

"Much to their disappointment, it never really happens. And lots of guys ask me questions, sex-based questions for their own sexual accounts. So it's kind of — it's an interesting place to be."

Piper is not certain if this latest phase in her career will widen the variety of roles she is offered.

She's not worrying about that right now. The baby she was hiding during the filming of season two, a boy, is now 3 months old. (She is married to Laurence Fox.)

Piper's getting ready to start a nine-week filming schedule to shoot season three.

"This is really the perfect job," she says. "We shoot about an hour away" from her home. "And when we are done I will have plenty of time to be a mom."

And she will be able to shoot the next season without trying to hide a pregnancy.

Caption: Billie Piper stars in Showtime's "Secret Diary of a Call Girl." She was a teen pop star in England, but says acting was always her dream.