Difference between revisions of "Doctor at The Mill" 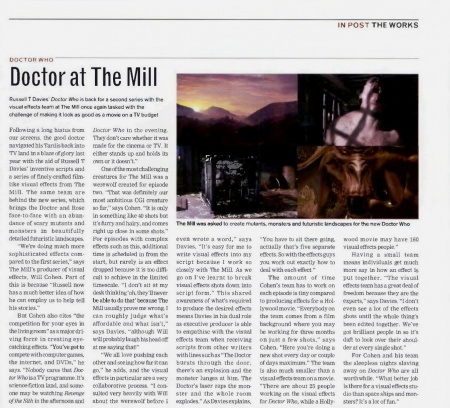 The Mill was asked to create mutants, monsters and futuristic landscapes for the new Doctor Who

Following a long hiatus from our screens, the good doctor navigated his Tardis back into TV land in a blaze of glory last year with the aid of Russell T Davies' inventive scripts and a series of finely-crafted film-like visual effects from The Mill. The same team are behind the new series, which brings the Doctor and Rose face-to-face with an abundance of scary mutants and monsters in beautifully detailed futuristic landscapes.

"We're doing much more sophisticated effects compared to the first series," says The Mill's producer of visual effects, Will Cohen. Part of this is because "Russell now has a much better idea of how he can employ us to help tell his stories."

But Cohen also cites "the competition for your eyes in the living room" as a major driving force in creating eye-catching effects. "You've got to compete with computer games, the internet, and DVDs," he says. "Nobody cares that Doctor Who is a TV programme. It's science-fiction land, and someone may be watching Revenge of the Sith in the afternoon and Doctor Who in the evening. They don't care whether it was made for the cinema or TV. It either stands up and holds its own or it doesn't."

One of the most challenging creatures for The Mill was a werewolf created for episode two. "That was definitely our most ambitious CGI creature so far," says Cohen. "It is only in something like 40 shots but it's furry and hairy, and comes right up close in some shots." For episodes with complex effects such as this, additional time is scheduled in from the start, but rarely is an effect dropped because it is too difficult to achieve in the limited timescale. "I don't sit at my desk thinking 'oh, they'll never be able to do that' because The Mill usually prove me wrong. I can roughly judge what's affordable and what isn't," says Davies, "although Will will probably laugh his head off at me saying that!"

"We all love pushing each other and seeing how far it can go," he adds, and the visual effects in particular are a very collaborative process. "I consulted very heavily with Will about the werewolf before I even wrote a word," says Davies. "It's easy for me to write visual effects into my script because I work so closely with The Mill. As we go on I've learnt to break visual effects shots down into script form." This shared awareness of what's required to produce the desired effects means Davies in his dual role as executive producer is able to empathise with the visual effects team when receiving scripts from other writers with lines such as "The Doctor bursts through the door, there's an explosion and the monster lunges at him. The Doctor's laser zaps the monster and the whole room explodes." As Davies explains,

"You have to sit there going, actually that's five separate effects. So with the effects guys you work out exactly how to deal with each effect."

The amount of time Cohen's team has to work on each episode is tiny compared to producing effects for a Hollywood movie. "Everybody on the team comes from a film background where you may be working for three months on just a few shots," says Cohen. "Here you're doing a new shot every day or couple of days maximum." The team is also much smaller than a visual effects team on a movie. "There are about 25 people working on the visual effects for Doctor Who, while a Holly wood movie may have 160 visual effects people."

Having a small team means individuals get much more say in how an effect is put together. "The visual effects team has a great deal of freedom because they are the experts," says Davies. "I don't even see a lot of the effects shots until the whole thing's been edited together. We've got brilliant people in so it's daft to look over their shoulder at every single shot."

For Cohen and his team the sleepless nights slaving away on Doctor Who are all worthwhile. "What better job is there for a visual effects studio than space ships and monsters? It's a lot of fun."