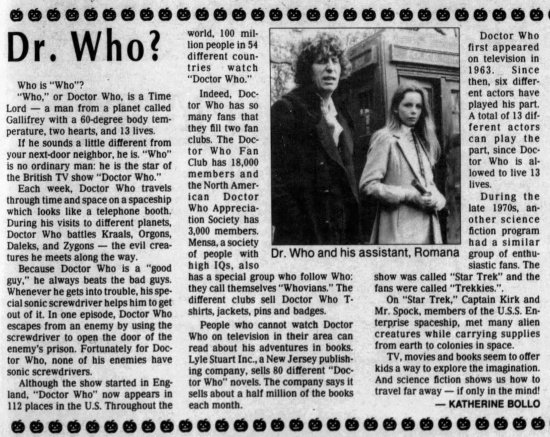 "Who," or Doctor Who, is a Time Lord — a man from a planet called Gallifrey with a 60-degree body temperature, two hearts, and 13 lives.

If he sounds a little different from your next-door neighbor, he is. "Who" is no ordinary man: he is the star of the British TV show "Doctor Who."

Each week, Doctor Who travels through time and space on a spaceship which looks like a telephone booth. During his visits to different planets, Doctor Who battles Kraals, Orgons, Daleks, and Zygons — the evil creatures he meets along the way.

Because Doctor Who is a "good guy," he always beats the bad guys. Whenever he gets into trouble, his special sonic screwdriver helps him to get out of it. In one episode, Doctor Who escapes from an enemy by using the screwdriver to open the door of the enemy's prison. Fortunately for Doctor Who, none of his enemies have sonic screwdrivers.

Although the show started in England, "Doctor Who" now appears in 112 places in the U.S. Throughout the world, 100 million people in 54 different countries watch "Doctor Who."

Indeed, Doctor Who has so many fans that they fill two fan clubs. The Doctor Who Fan Club has 18,000 members and the North American Doctor Who Appreciation Society has 3,000 members. Mensa, a society of people with high IQs, also has a special group who follow Who: they call themselves "Whovians." The different clubs sell Doctor Who T-shirts, jackets, pins and badges.

People who cannot watch Doctor Who on television in their area can read about his adventures in books. Lyle Stuart Inc., a New Jersey publishing company, sells 80 different "Doctor Who" novels. The company says it sells about a half million of the books each month.

During the late 1970s, another science fiction program had a similar group of enthusiastic fans. The show was called "Star Trek" and the fans were called "Trekkies.".

On "Star Trek," Captain Kirk and Mr. Spock, members of the U.S.S. Enterprise spaceship, met many alien creatures while carrying supplies from earth to colonies in space.

TV, movies and books seem to offer kids a way to explore the imagination. And science fiction shows us how to travel far away — if only in the mind!

Caption: Dr. Who and his assistant, Romana