Dr. Who and the Daleks (Kinematograph Weekly) 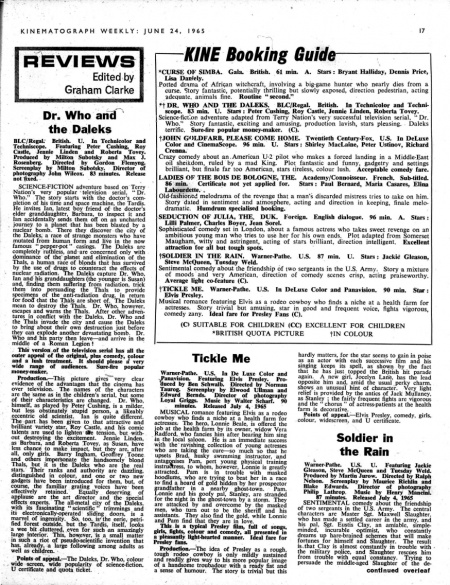 SCIENCE-FICTION adventure based on Terry Nation's very popular television serial, "Dr. Who." The story starts with the doctor's completion of his time and space machine, the Tardis. He invites Ian, latest boy friend of the doctor's elder granddaughter, Barbara, to inspect it and Ian accidentally sends them off on an uncharted journey to a planet that has been blasted by a nuclear bomb. There they discover the city of the Daleks, a race of strange monsters who have mutated from human form and live in the now famous "pepper-pot" casings. The Daleks are completely ruthless, and are concerned only with dominance of the planet and elimination of the Thals, a human race of blonds that has survived by the use of drugs to counteract the effects of nuclear radiation. The Daleks capture Dr. Who. Ian and his granddaughters (the younger is Susan) and, finding them suffering from radiation, trick them into persuading the Thals to provide specimens of the anti-radiation drug, in return for food that the Thals are short of. The Daleks mean to destroy the Thals. Dr. Who, however, escapes and wams the Thals. After other adventures in conflict with the Daleks, Dr. Who and the Thals invade the city and cause the Daleks to bring about their own destruction just before they can explode another devastating bomb. Dr. Who and his party then leave—and arrive in the middle of a Roman Legion !

This version of the television serial has all the outer appeal of the original, plus comedy, colour and a lush treatment. It should please a very wide range of audiences. Sure-fire popular money-maker.

Production.—This picture gives very clear evidence of the advantages that the cinema has over television. The names of the characters are the same as in the children's serial, but some of their characteristics are changed. Dr. Who. himself, as played by Peter Cushing. is a milder. but less obstinately stupid person, a likeably eccentric old scientist. Ian is quite different. The part has been given to that attractive and brilliant variety star, Roy Castle, and his comic talents are used to lighten the tension, but without destroying the excitement. Jennie Linden, as Barbara, and Roberta Tovey. as Susan, have less chance to make impact, but they are, after all, only girls. Barry Ingham, Geoffrey Toone and others impersonate the handsomely blond Thals, but it is the Daleks who are the real stars. Their ranks and authority are dazzling, distinguished in colour, and one or two new gadgets have been introduced for them, but, of course, the familiar grating voices have been effectively retained. Equally deserving of applause are the art director and the special effects experts. The all-metal city of the Daleks. with its fascinating "scientific" trimmings and its electronically-operated sliding doors, is a marvel of ingenuity. So, too. is' the eerie, petrified forest outside, but the Tardis, itself, looks a wee bit cluttered, even for such an amazingly large interior. This, however, is a small matter in such a riot of pseudo-scientific invention that has, already, a large following among adults as well as children.