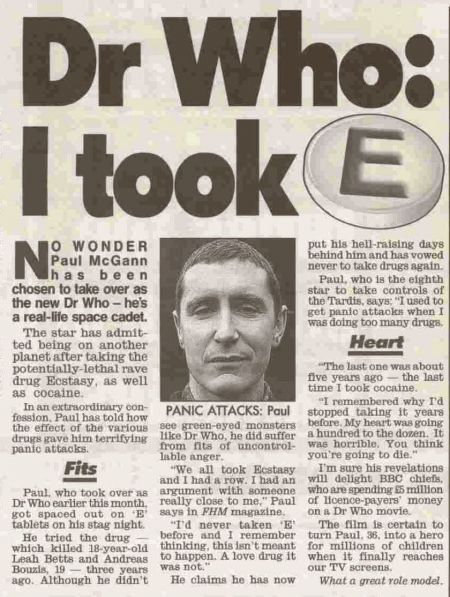 The star has admitted being on another planet after taking the potentially-lethal rave drug Ecstasy, as well as cocaine.

In an extraordinary confession, Paul has told how the effect of the various drugs gave him terrifying panic attacks.

Paul. who took over as Dr Who earlier this month. got spaced out on 'E' tablets on his stag night. He tried the drug — which killed 18-year-old Leah Betts and Andreas Bouzla, 19 — three years ago. Although he didn't see green-eyed monsters like Dr Who. he did suffer from fits of uncontrollable anger.

"We all took Ecstasy and I had a row. I had an argument with someone really close to me." Paul says in FHM magazine. "I'd never taken 'E' before and I remember thinking, this isn't meant to happen. A love drug it was not

He claims he has now put his hell-raising days behind him and has vowed never to take drugs again.

Paul, who is the eighth star to take controls of the Tardis, says: "I used to get panic attacks when I was doing too many drugs.

"The last one was about five years ago — the last time I took cocaine.

"I remembered why I'd stopped taking it years before. My heart was going a hundred to the dozen. It was horrible. You think you're going to die."

I'm sure his revelations will delight BBC chiefs, who are spending £5 million of licence-payers' money on a Dr Who movie.

The film is certain to turn Paul, 36, into a hero for millions of children when it finally reaches our TV screens.

What a great role model.