Dr Who sells Tardis to help the children 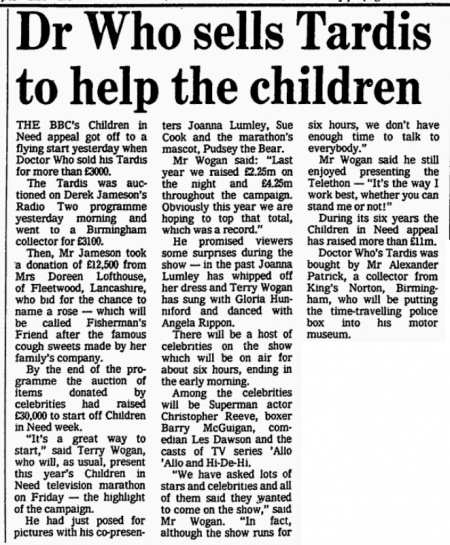 THE BBC's Children in Need appeal got off to a flying start yesterday when Doctor Who sold his Tardis for more than £3000.

The Tardis was auctioned on Derek Jameson's Radio Two programme yesterday morning and went to a Birmingham collector for £3100.

Then, Mr Jameson took a donation of £12,500 from Mrs Doreen Lofthouse, of Fleetwood, Lancashire, who bid for the chance to name a rose — which will be called Fisherman's Friend after the famous cough sweets made by her family's company.

By the end of the programme the auction of items donated by celebrities had raised £30,000 to start off Children in Need week.

"It's a great way to start," said Terry Wogan, who will, as usual, present this year's Children in Need television marathon on Friday — the highlight of the campaign.

He had just posed for pictures with his co-presenters Joanna Lumley, Sue Cook and the marathon's mascot, Pudsey the Bear.

Mr Wogan said: "Last year we raised £2.25m on the night and f01.25m throughout the campaign. Obviously this year we are hoping to top that total, which was a record."

He promised viewers some surprises during the show — in the past Joanna Lumley has whipped off her dress and Terry Wogan has sung with Gloria Hunniford and danced with Angela Rippon.

There will be a host of celebrities on the show which will be on air for about six hours, ending in the early morning.

Among the celebrities will be Superman actor Christopher Reeve, boxer Barry McGuigan, comedian Les Dawson and the casts of TV series 'Allo 'Allo and Hi-De-Hi.

"We have asked lots of stars and celebrities and all of them said they wanted to come on the show," said Mr Wogan. "In fact, although the show runs for six hours, we don't have enough time to talk to everybody."

Mr Wogan said he still enjoyed presenting the Telethon — "It's the way I work best, whether you can stand me or not!"

During its six years the Children in Need appeal has raised more than £11m.

Doctor Who's Tardis was bought by Mr Alexander Patrick, a collector from King's Norton, Birmingham, who will be putting the time-travelling police box into his motor museum.