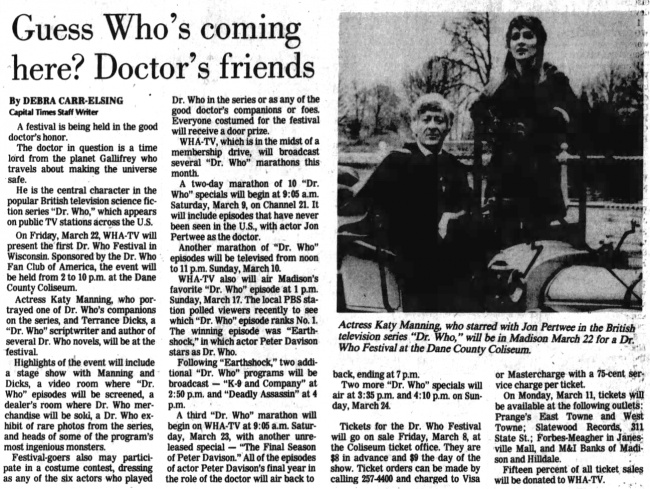 A festival is being held in the good doctor's honor.

The doctor in question is a time lord from the planet Gallifrey who travels about making the universe safe.

He is the central character in the popular British television science fiction series "Dr. Who," which appears on public TV stations across the U.S.

On Friday, March 22, WHA-TV will present the first Dr. Who Festival in Wisconsin. Sponsored by the Dr. Who Fan Club of America, the event will be held from 2 to 10 p.m. at the Dane County Coliseum.

Actress Katy Manning, who portrayed one of Dr. Who's companions on the series, and Terrance Dicks, a "Dr. Who" scriptwriter and author of several Dr. Who novels, will be at the festival.

Highlights of the event will include a stage show with Manning and Dicks, a video room where "Dr. Who" episodes will be screened, a dealer's room where Dr. Who merchandise will be sold, a Dr. Who exhibit of rare photos from the series, and heads of some of the program's most ingenious monsters.

Festival-goers also may participate in a costume contest, dressing as any of the six actors who played Dr. Who in the series or as any of the good doctor's companions or foes. Everyone costumed for the festival will receive a door prize.

WHA-TV, which is in the midst of a membership drive, will broadcast several "Dr. Who" marathons this month.

A two-day marathon of 10 "Dr. Who" specials will begin at 9:05 a.m. Saturday, March 9, on Channel 21. It will include episodes that have never been seen in the U.S., with actor Jon Pertwee as the doctor.

Another marathon of "Dr. Who" episodes will be televised from noon to 11 p.m. Sunday, March 10.

WHA-TV also will air Madison's favorite "Dr. Who" episode at 1 p.m. Sunday, March 17. The local PBS station polled viewers recently to see which "Dr. Who" episode ranks No. 1. The winning episode was "Earthshock," in which actor Peter Davison stars as Dr. Who.

A third "Dr. Who" marathon will begin on WHA-TV at 9:05 a.m. Saturday, March 23, with another unreleased special — "The Final Season of Peter Davison." All of the episodes of actor Peter Davison's final year in the role of the doctor will air back to back, ending at 7 p.m.

Tickets for the Dr. Who Festival will go on sale Friday, March 8, at the Coliseum ticket office. They are $8 in advance and $9 the day of the show. Ticket orders can be made by calling 257-4400 and charged to Visa or Mastercharge with a 75-cent service charge per ticket.

On Monday, March 11, tickets will be available at the following outlets: Prange's East Towne and West Towne; Slatewood Records, 311 State St.; Forbes-Meagher in Janesville Mall, and M&I Banks of Madison and Hilldale.

Fifteen percent of all ticket sales will be donated to WHA-TV.

Caption: Actress Katy Manning, who starred with Jon Pertwee in the British television series "Dr. Who," will be in Madison March 22 for a Dr. Who Festival at the Dane County Coliseum.