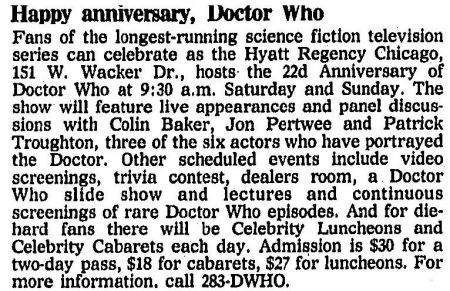 Fans of the longest-running science fiction television series can celebrate as the Hyatt Regency Chicago, 151 W. Wacker Dr., hosts the 22d Anniversary of Doctor Who at 9:30 a.m. Saturday and Sunday. The show will feature live appearances and panel discussions with Colin Baker, Jon Pertwee and Patrick Troughton, three of the six actors who have portrayed the Doctor. Other scheduled events include video screenings, trivia contest, dealers room, a Doctor Who slide show and lectures and continuous screenings of rare Doctor Who episodes. And for diehard fans there will be Celebrity Luncheons and Celebrity Cabarets each day. Admission is $30 for a two-day pass, $18 for cabarets, $27 for luncheons. For more information. call 283-DWHO.