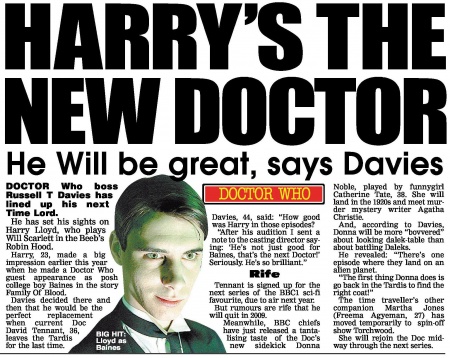 He Will be great, says Davies

DOCTOR Who boss Russell T Davies has lined up his next Time Lord.

He has set his sights on Harry Lloyd, who plays Will Scarlett in the Beeb's Robin Hood.

Harry, 23, made a big impression earlier this year when he made a Doctor Who guest appearance as posh college boy Baines in the story Family Of Blood.

Davies decided there and then that he would be the perfect replacement when current Doc David Tennant, 36, leaves the Tardis for the last time.

Davies, 44, said: "How good was Harry in those episodes?

"After his audition I sent a note to the casting director saying: 'He's not just good for Baines, that's the next Doctor!' Seriously. He's so brilliant."

Tennant is signed up for the next series of the BBC1 sci-fi favourite, due to air next year. But rumours are rife that he will quit in 2009.

And, according to Davies, Donna will be more "bovvered" about looking dalek-table than about baffling Daleks.

He revealed: "There's one episode where they land on an alien planet.

"The first thing Donna does is go back in the Tardis to find the right coat!"

She will rejoin the Doc midway through the next series.