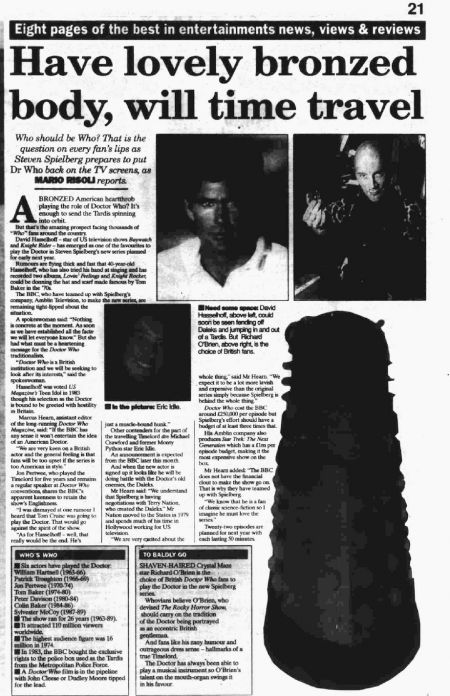 Who should be Who? That is the question on every fan's lips as Steven Spielberg prepares to put Dr Who back on the TV screens, as MARK RISOLI reports.

A BRONZED American heartthrob playing the role of Doctor Who? It's enough to the Tardis spinning into orbit.

But that's the amazing prospect facing thousands of "Who" fans around the country.

David Hasselhoff - star of US television shows Baywatch and Knight Rider - has emerged as one of the favourites play the Doctor in Steven Spielberg's new series planned for early next year.

Rumours are flying thick and fast that 40-year-old Hasselhoff, who has also tried his hand at singing and has recorded two albums, Lovin' Feelings and Knight Rocker, could be donning the hat and scarf made famous by Tom Baker in the 70s.

The BBC, who have to teamed up with Spielberg's company, Amblin Television, to make the new series, are remaining tight-lipped about the situation.

A spokeswoman said: "Nothing is concrete at the moment. As soon as we have established all the facts we will let everyone know." But she had what must be a heartening message for Doctor Who traditionalists.

"Doctor Who is a British institution and we will be seeking to look after its interests," said the spokeswoman.

Hasselhoff was voted US Magazine's Teen Idol in 1983 though his selection as the Doctor is bound to be greeted with hostility in Britain.

Marcus Hearn, assistant editor of the long-running Doctor Who Magazine, said: "If the BBC has an sense it won't entertain the idea of an American Doctor.

"We are very keen on a British actor and the general feeling is that fans will be too upset if the series is too American in style."

Jon Pertwee, who played the Timelord for five years and remains a regular speaker at Doctor Who conventions, shares the BBC's apparent keenness to retain the show's Englishness.

"I dismayed at one rumour I heard that Tom Cruise was going to play the Doctor. That would go against the spirit of the show.

"As for Hasselhoff - well, that really would be the end. He's just a muscle-bound hunk."

Other contenders for the part of the travelling time lord are Michael Crawford and former Monty Python star Eric Idle.

An announcement is expected from the BBC later this month.

And when the new actor is signed up it looks like he will be doing battle with the doctor's old enemies, the Daleks.

Mr. Hearn said: "We understand that Spielberg is having negotiations with Terry Nation, who created the Daleks. Mr. Nation moved to the states in 1979 and spends much of his time in Hollywood working for US television.

"We're very excited about the whole thing," said Mr. Hearn. "We expect it to be a lot more lavish and expensive than the original series simply because Spielberg is behind the whole thing."

Dr. Who cost the BBC around £250,000 per episode but Spielberg's effort should have a budget of at least three times that.

His Amblin company also produces Star Trek: The Next Generation which has a £1m per episode budget, making it the most expensive show on the box.

Mr. Hearn added: "The BBC does not have the financial clout to make the show go on. That is why they have teamed up with Spielberg.

"We know that he is a fan of classic science-fiction so I imagine he must love the series."

22 episodes are planned for next year with each lasting 50 minutes.

Caption: In the picture: Eric Idle

Caption: Need some space: David Hasselhoff, above left, could soon be seen fending off Daleks and jumping in and out of a Tardis. But Richard O'Brien, above right, is the choice a British fans.

Shaven-haired Crystal Maze star Richard O'Brien is the choice of British Doctor Who fans to play the Doctor in the new Spielberg series.

Whovians believe O'Brien, who devised The Rocky Horror Show, should carry on the tradition of the Doctor being portrayed as an eccentric British gentleman.

And fans like his zany humour and outrageous dress sense - hallmarks of a true Timelord.

The Doctor has always been able to play a musical instrument so O'Brien's talent on the mouth organ swings in his favour.