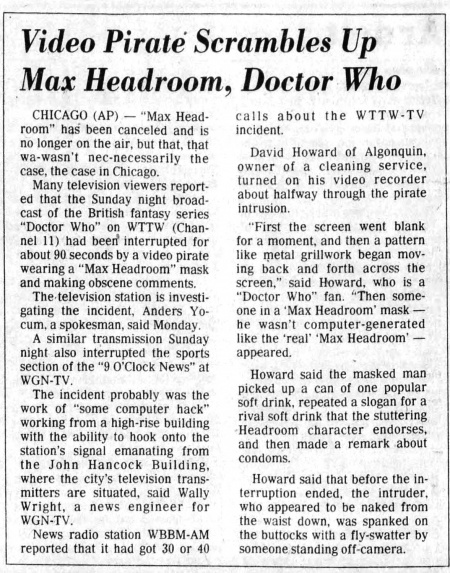 CHICAGO (AP) — "Max Headroom" has been canceled and is no longer on the air, but that, that wa-wasn't nec-necessarily the case, the case in Chicago.

Many television viewers reported that the Sunday night broadcast of the British fantasy series "Doctor Who" on WTTW, Channel 11, was interrupted for about 90 seconds by a video pirate wearing a "Max Headroom" mask and making obscene comments.

A similar transmission Sunday night also interrupted the sports section of the "9 O'Clock News" at WGN-TV.

The incident probably was the work of "some computer hack" working from a high-rise building with the ability to hook onto the station's signal emanating from the John Hancock Building, where the city's television transmitters are located, said Wally Wright, a news engineer for WGN-TV.

At least one viewer who saw the interruption managed to catch part of it on videotape.

David Howard of Algonquin, owner of a cleaning service, turned on his video recorder about halfway through the pirate intrusion.

"First the screen went blank for a moment, and then a pattern like metal grillwork began moving back and forth across the screen," said Howard, who is a "Doctor Who" fan. "Then someone in a 'Max Headroom' mask — he wasn't computer-generated like the 'real' 'Max Headroom' — appeared."

Howard said the masked man picked up a can of one popular soft drink, repeated a slogan for a rival soft drink that the stuttering Headroom character endorses, then made a remark about condoms.

Howard said that before the interruption ended, the intruder, who appeared to be naked from the waist down, was spanked on the buttocks with a flyswatter by someone standing off-camera.