Lalla Wooed by Dr Who 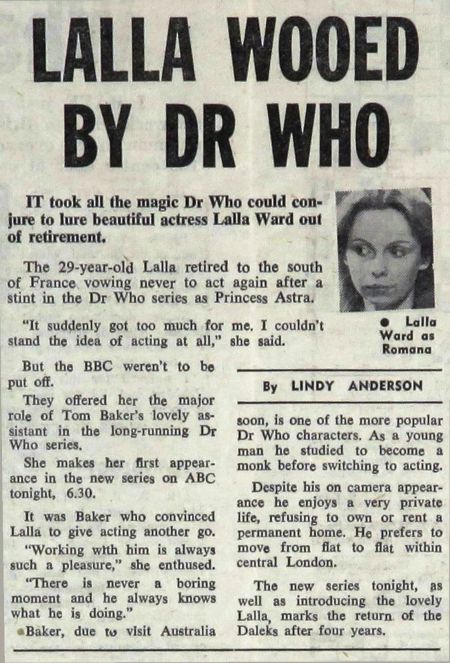 IT took all the magic Dr Who could conjure to lure beautiful actress Lalla Ward out of retirement.

The 29-year-old Lalla retired to the south of France vowing never to act again after a stint in the Dr Who series as Princess Astra.

"It suddenly got too much for me. I couldn't stand the idea of acting at all," she said.

But the BBC weren't to be put off.

They offered her the major role of Tom Baker's lovely assistant in the long-running Dr Who series.

She makes her first appearance in the new series on ABC tonight, 6.30.

It was Baker who convinced Lalla to give acting another go.

"Working with him is always such a pleasure," she enthused.

"There is never a boring moment and he always knows what he is doing."

Despite his on camera appearance he enjoys a very private life, refusing to own or rent a permanent home. He prefers to move from flat to flat within central London.

The new series tonight, as well as introducing the lovely Lalla, marks the return of the Daleks after four years.