Look who's the Doctor's new girl 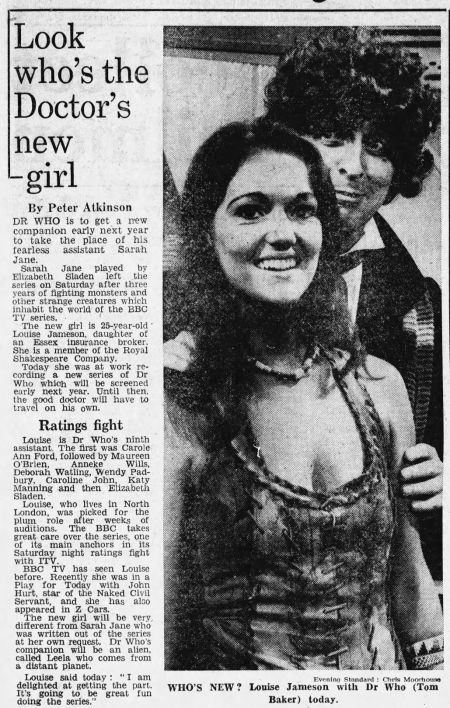 DR WHO is to get a new companion early next year to take the place of his fearless assistant Sarah Jane.

Sarah Jane played by Elizabeth Sladen left the series on Saturday after three years of fighting monsters and other strange creatures which inhabit the world of the BBC TV series.

The new girl is 25-year-old Louise Jameson, daughter of an Essex insurance broker. She is a member of the Royal Shakespeare Company.

Today she was at work recording a new series of Dr Who which will be screened early next year. Until then, the good doctor will have to travel on his own.

Louise, who lives in North London, was picked for the plum role after weeks of auditions. The BBC takes great care over the series, one of its main anchors in its Saturday night ratings fight with ITV.

BBC TV has seen Louise before. Recently she was in a Play for Today with John Hurt, star of the Naked Civil Servant, and she has also appeared in Z Cars.

The new girl will be very, different from Sarah Jane who was written out of the series at her own request. Dr Who's companion will be an alien, called Leela who comes from a distant planet.

Louise said today : "I am delighted at getting the part. It's going to be great fun doing the series."