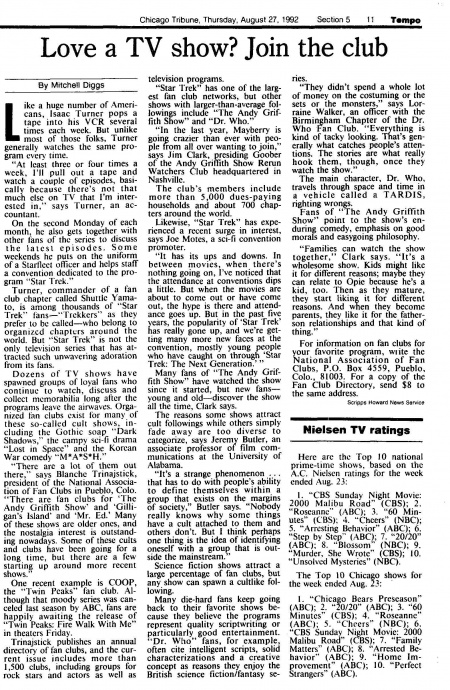 Like a huge number of Americans, Isaac Turner pops a tape into his VCR several times each week. But unlike most of those folks, Turner generally watches the same program every time.

"At least three or four times a week, I'll pull out a tape and watch a couple of episodes, basically because there's not that much else on TV that I'm interested in," says Turner, an accountant.

On the second Monday of each month, he also gets together with other fans of the series to discuss the latest episodes. Some weekends he puts on the uniform of a Starfleet officer and helps staff a convention dedicated to the program "Star Trek."

Turner, commander of a fan club chapter called Shuttle Yama-to, is among thousands of "Star Trek" fans—"Trekkers" as they prefer to be called—who belong to organized chapters around the world. But "Star Trek" is not the only television series that has attracted such unwavering adoration from its fans.

Dozens of TV shows have spawned groups of loyal fans who continue to watch, discuss and collect memorabilia long after the programs leave the airwaves. Organized fan clubs exist for many of these so-called cult shows, including the Gothic soap "Dark Shadows," the campy sci-fi drama "Lost in Space" and the Korean War comedy "M*A*S*H."

"There are a lot of them out there," says Blanche Trinajstick, president of the National Association of Fan Clubs in Pueblo, Colo. "There are fan clubs for 'The Andy Griffith Show' and 'Gilligan's Island' and 'Mr. Ed.' Many of these shows are older ones, and the nostalgia interest is outstanding nowadays. Some of these cults and clubs have been going for a long time, but there are a few starting up around more recent shows."

One recent example is COOP, the "Twin Peaks" fan club. Although that moody series was canceled last season by ABC, fans are happily awaiting the release of "Twin Peaks: Fire Walk With Me" in theaters Friday.

Trinajstick publishes an annual directory of fan clubs, and the current issue includes more than 1,500 clubs, including groups for rock stars and actors as well as television programs.

"Star Trek" has one of the largest fan club networks, but other shows with larger-than-average followings include "The Andy Griffith Show" and "Dr. Who."

"In the last year, Mayberry is going crazier than ever with people from all over wanting to join," says Jim Clark, presiding Goober of the Andy Griffith Show Rerun Watchers Club headquartered in Nashville.

The club's members include more than 5,000 dues-paying households and about 700 chapters around the world.

"It has its ups and downs. In between movies, when there's nothing going on, I've noticed that the attendance at conventions dips a little. But when the movies are about to come out or have come out, the hype is there and attendance goes up. But in the past five years, the popularity of 'Star Trek' has really gone up, and we're getting many more new faces at the convention, mostly young people who have caught on through 'Star Trek: The Next Generation.'"

Many fans of "The Andy Griffith Show" have watched the show since it started, but new fans—young and old—discover the show all the time, Clark says.

The reasons some shows attract cult followings while others simply fade away are too diverse to categorize, says Jeremy Butler, an associate professor of film communications at the University of Alabama.

"It's a strange phenomenon ... that has to do with people's ability to define themselves within a group that exists on the margins of society," Butler says. "Nobody really knows why some things have a cult attached to them and others don't. But I think perhaps one thing is the idea of identifying oneself with a group that is outside the mainstream."

Science fiction shows attract a large percentage of fan clubs, but any show can spawn a cultlike following.

Many die-hard fans keep going back to their favorite shows because they believe the programs represent quality scriptwriting or particularly good entertainment. "Dr. Who" fans, for example, often cite intelligent scripts, solid characterizations and a creative concept as reasons they enjoy the British science fiction/fantasy series.

"They didn't spend a whole lot of money on the costuming or the sets or the monsters," says Lorraine Walker, an officer with the Birmingham Chapter of the Dr. Who Fan Club. "Everything is kind of tacky looking. That's generally what catches people's attentions. The stories are what really hook them, though, once they watch the show."

The main character, Dr. Who, travels through space and time in a vehicle called a TARDIS, righting wrongs.

Fans of "The Andy Griffith Show" point to the show's enduring comedy, emphasis on good morals and easygoing philosophy.

For information on fan clubs for your favorite program, write the National Association of Fan Clubs, P.O. Box 4559, Pueblo, Colo., 81003. For a copy of the Fan Club Directory, send $8 to the same address.