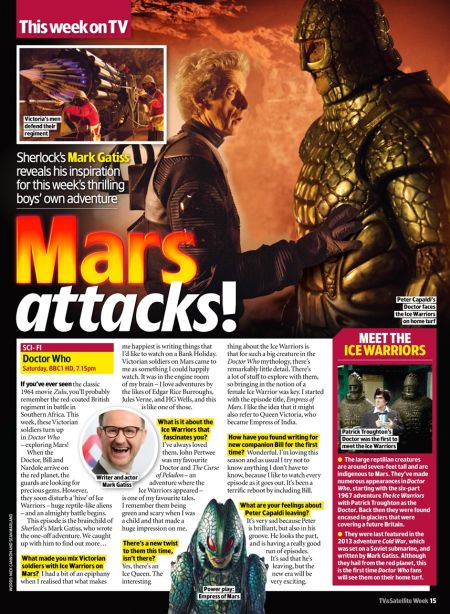 If you've ever seen the classic 1964 movie Zulu, you'll probably remember the red-coated British regiment in battle in Southern Africa. This week, these Victorian soldiers turn up in Doctor Who — exploring Mars! When the Doctor, Bill and Nardole arrive on the red planet, the guards are looking for precious gems. However, they soon disturb a 'hive' of Ice Warriors — huge reptile-like aliens — and an almighty battle begins.

This episode is the brainchild of Sherlock's Mark Gatiss, who wrote the one-off adventure. We caught up with him to find out more...

What made you mix Victorian soldiers with Ice Warriors on Mars?

I had a bit of an epiphany when I realised that what makes me happiest is writing things that I'd like to watch on a Bank Holiday. Victorian soldiers on Mars came to me as something I could happily watch. It was in the engine room of my brain — I love adventures by the likes of Edgar Rice Burroughs, Jules Verne, and HG Wells, and this is like one of those.

What is it about the Ice Warriors that fascinates you?

I've always loved them. John Pertwee was my favourite Doctor and The Curse of Peladon — an adventure where the Ice Warriors appeared — is one of my favourite tales. I remember them being green and scary when I was a child and that made a huge impression on me.

There's a new twist to them this time, isn't there?

Yes, there's an Ice Queen. The interesting thing about the Ice Warriors is that for such a big creature in the Doctor Who mythology, there's remarkably little detail. There's a lot of stuff to explore with them, so bringing in the notion of a female Ice Warrior was key. I started with the episode title, Empress of Mars. I like the idea that it might also refer to Queen Victoria, who became Empress of India.

How have you found writing for new companion Bill for the first time?

Wonderful. I'm loving this season and as usual I try not to know anything I don't have to know, because I like to watch every episode as it goes out. It's been a terrific reboot by including Bill.

What are your feelings about Peter Capaldi leaving?

It's very sad because Peter is brilliant, but also in his groove. He looks the part, and is having a really good run of episodes.

It's sad that he's leaving, but the new era will be very exciting.

The large reptilian creatures are around seven-feet tall and are indigenous to Mars. They've made numerous appearances in Doctor Who, starting with the six-part 1967 adventure The Ice Warriors with Patrick Troughton as the Doctor. Back then they were found encased in glaciers that were covering a future Britain.

They were last featured in the 2013 adventure Cold War, which was set on a Soviet submarine, and written by Mark Gatiss. Although they hail from the red planet, this is the first time Doctor Who fans will see them on their home turf.

Caption: Patrick Troughton's Doctor was the first to meet the Ice Warriors