Online world sneaks villain into No 10 for new Dr Who 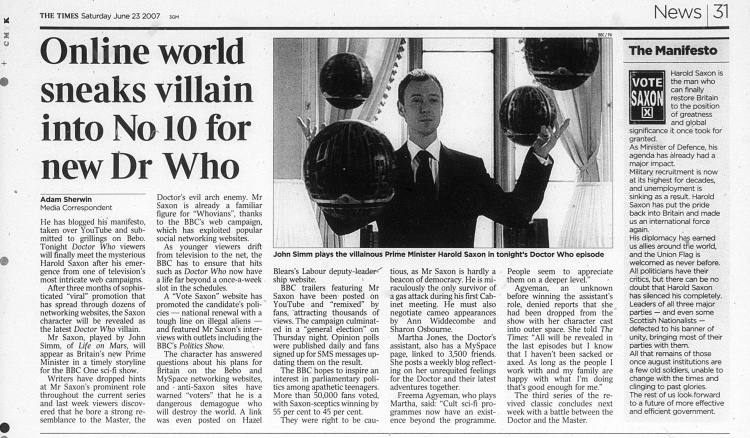 He has blogged his manifesto, taken over YouTube and submitted to grillings on Bebo. Tonight Doctor Who viewers will finally meet the mysterious Harold Saxon after his emergence from one of television's most intricate web campaigns.

After three months of sophisticated "viral" promotion that has spread through dozens of networking websites, the Saxon character will be revealed as the latest Doctor Who villain.

Mr Saxon, played by John Simm, of Life on Mars, will appear as Britain's new Prime Minister in a timely storyline for the BBC One sci-fi show.

Writers have dropped hints at Mr Saxon's prominent role throughout the current series and last week viewers discovered that he bore a strong resemblance to the Master, the Doctor's evil arch enemy. Mr Saxon is already a familiar figure for "Whovians", thanks to the BBC's web campaign, which has exploited popular social networking websites.

As younger viewers drift from television to the net, the BBC has to ensure that hits such as Doctor Who now have a life far beyond a once-a-week slot in the schedules.

A "Vote Saxon" website has promoted the candidate's policies — national renewal with a tough line on illegal aliens —and featured Mr Saxon's interviews with outlets including. the BBC's Politics Show.

The character has answered questions about his plans for Britain on the Bebo and MySpace networking websites, and anti-Saxon sites have warned "voters" that he is a dangerous demagogue who will destroy the world. A link was even posted on Hazel Blears's Labour deputy-leadership website.

BBC trailers featuring Mr Saxon have been posted on YouTube and "remixed" by fans, attracting thousands of views. The campaign culminated in a "general election" on Thursday night. Opinion polls were published daily and fans signed up for SMS messages updating them on the result.

The BBC hopes to inspire an interest in parliamentary politics among apathetic teenagers. More than 50,000 fans voted, with Saxon-sceptics winning by 55 per cent to 45 per cent. They were right to be cautious, as Mr Saxon is hardly a beacon of democracy. He is miraculously the only survivor of a gas attack during his first Cabinet meeting. He must also negotiate cameo appearances by Ann Widdecombe and Sharon Osbourne.

Martha Jones, the Doctor's assistant, also has a MySpace page, linked to 3,500 friends. She posts a weekly blog reflecting on her unrequited feelings for the Doctor and their latest adventures together.

Freema Agyeman, who plays Martha, said: "Cult sci-fi programmes now have an existence beyond the programme. People seem to appreciate them on a deeper level."

Agyeman, an unknown before winning the assistant's role, denied reports that she had been dropped from the show with her character cast into outer space. She told The Times: "All will be revealed in the last episodes but I know that I haven't been sacked or axed. As long as the people I work with and my family are happy with what I'm doing that's good enough for me."

The third series of the revived classic concludes next week with a battle between the Doctor and the Master.

As Minister of Defence, his agenda has already had a major impact.

Military recruitment is now at its highest for decades, and unemployment is sinking as a result. Harold Saxon has put the pride back into Britain and made us an international force again.

His diplomacy h earned us allies around the world, and the Union Flag is welcomed as never before. All politicians have their critics, but there can be no doubt that Harold Saxon has silenced his completely. Leaders of all three major parties — and even some Scottish Nationalists —defected to his banner of unity, bringing most of their parties with them.

All that remains of those once august institutions are a few old soldiers, unable to change with the times and clinging to past glories. The rest of us look-forward to a future of more effective and efficient government.